Benue State Governor, Samuel Ortom, has disclosed that the security agencies in the state were fully mobilized to commence the seizure of illegal weapons.

He made the disclosure today at the funeral of the late Aya Nyiekor Abbagu at Mtserkyaa Abbagu village in Ukum local government area.

According to him all the conventional security agencies such as the police, army, civil defense corps and state security service have been mobilized to arrest possessors of illegal weapons and to seize such from them at the end of August, 2015.

Governor Ortom stated that insecurity was a threat to all residents in the state especially the commitment of his administration to creating an enabling environment for investment to thrive in the state.

He stated that the carrot approach he had used to tackle such people would expire on August 31st, 2015 after which he would wield the big stick and solicited the cooperation of community, religious and traditional leaders in the efforts to curb crime.

The Governor said in the onslaught that would go into full swing at the beginning of next month anyone who harbors a possessor of an illegal weapon would be arrested alongside such a person for persecution.

He expressed gratitude to God that the deceased enjoyed long life and passed on at the age of 123 years and prayed that others also live that long.

Governor Ortom reiterated his pledge to govern with the fear of God and be transparent in doing government business and urged the people to hold him and other government officials to account.

In response to the demands of Ukum Caretaker committee chairman, Solomon Kachina, and member of the House of Representatives, Emmanuel Udende, Governor Ortom promised to look into requests for the provision of critical infrastructure in the area.

Speaker of the State Assembly, Terkimbi Ikyange led members to pay last respects to the mother of a colleague, Dan Abbagu. 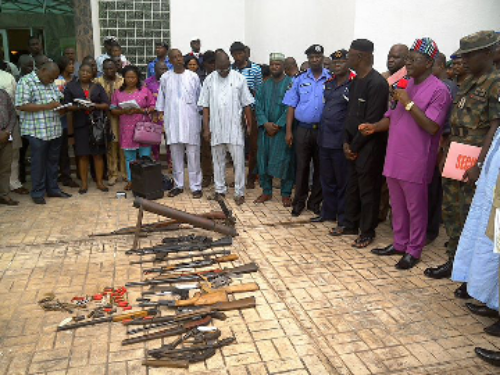