Between the warrior and the leader: A congratulatory message to Senator George Akume 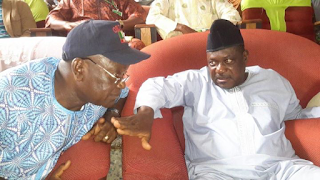 Dear Respected Sen. George Akume,
Only yesterday social media in Benue state was abuzz with mixed reactions over your nomination as Minister in the highly respected Federal Executive cabinet to represent Benue State, a state which you have variously led in different capacities.
This nomination did not come to me as a surprise owing to you tall Curriculum Vitae and your being inarguably the leader of the ruling All Progressives Congress (APC) in the state; not forgetting the role you have played since the formation of the party; Sir, it is even more that you have severally attempted a shot at the highly coveted position of Secretary to the Federal Government but lost it to one seen to be more deserving.
Sir, I write this as one who believes in the progress of the state and after studying the stories of leaders past and present viz-a-viz trends in Benue politics, even as a kid too small to lend a word of advice to your very experienced and sagacious person, has hinged my motivation for this piece on the Tiv adage that says “wanye kpa duughn yar tyour” (even a kid can over-turn a deer).
I am very aware that Benue state has long suffered leadership deficit until recently when the state is beginning to prove itself of leaders worth calling leader in persons like you, Governor Samuel Ortom, Senators Gabriel Suswam, Orker Jev and Abba Morro in whose leadership, younger ones like me believe should bring the best for our struggling state. This is why I am emboldened to do this correspondence.
I will naturally have preferred say this to you in person and not this public message, however like the biblical centurion, “I am not worthy” which is rather I say this from afar and hope it gets to you and in good fate too.
Hon. Minister (designate) sir, today your appointment is the cynosure of all eyes. Many who today watch you will view you in the prism of a Benue man appointed in the cabinet of President Muhammadu Buhari to help him work and also benefit your home state and not just the leader of the APC.
Sir, it is also true that your appointment today will be seen by many as a battle axe to swing at those who have been presumed adversaries and enemies indeed. It however to some of us who are naïve, it is an opportunity to show yourself a true leader and Christian albeit a revered knight of the Roman catholic church by rather than wasting time on home battles, push forward for greater goals.
As I write this piece I am very sure there are already a hundred drawing battle plans for a script already rehearsed, to ensure you become the harbinger of trouble and unsettlement, in a similar script played during the infamous Amaechi-Wike drama of power in Rivers state. Sir, this will rather dwarfen you tall image instead of multiply your already cult-like followership. May you not tow the path already predicted.
It is my utmost desire that you show your mettle that which has seen you rise systematically through civil service to political and public service by promoting the state and not person in all you do in this Federal Executive Cabinet. We have had ministers before but this is the chance for you to show your difference.
I also believe sir that this appointment has drawn you closer still to the President and this time your voice will be louder against the killing, massacre and systematic annihilation of your people by marauding Fulani herdsmen and a lasting solution be sought.
Finally I honestly crave your forgiveness if my message is misunderstood for spite instead of honest advice from a naïve youngman with the desire that you, who is of his kit and kin is amongst the shining stars from this cabinet of high expectations.
As the world waits to see if your appointment turns you into a true leader or a warrior, be sure of my highest regards and respect sir. I also pray and have resolved to start a novena for your success as you make Benue proud.
Ati Terkula is a social commentator and media practitioner from Anyiin, Logo Local Government
By Linda Ochagla at Tuesday, July 30, 2019