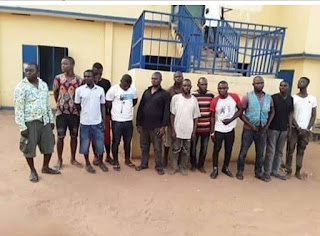 The resolve of the Executive Chairman BIRS, Mr. Andrew Ayabam  to sanitize our roads and eliminate all hoodlums and illegal roads blocks,  has again yielded results as 13 suspects were again arrested at various locations in the state.

This led to the arrest of the 13 suspects at different locations as listed below;

The fight against illegal road blocks and miscreants on our roads is a fight that must be won. All those who once found illegal tax activities as a profitable venture must realize it is not business as usual and engage themselves in legal means of earning a living.

The suspect have since been taken to the State Force Head Quarters Makurdi and shall be arraigned soon.
By Linda Ochagla at Thursday, September 05, 2019