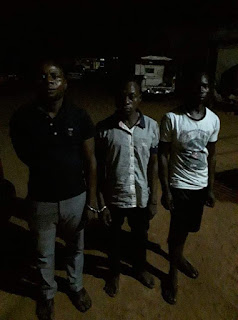 The culprits, Atime Orlu, Terhide Kumbul and Mzehemen Jaga were arrested at Luga in Gboko, near Tyogbenda Msa, in Ushongo and Awajir in Konshisha respectively.

They were caught operating illegal tax points and extorting the unsuspecting public.They will be charged to court today Monday,  2nd Sept. 2019.

It could be recalled that Executive Chairman Benue Internal Revenue Service (BIRS) Mr. Andrew Ayabam had on assumption of office announced a clamp down on all illegal tax points and activities in the state towards sanitizing the tax system.

Meanwhile it has further maintained that there  exist only 10 tax points in the state, namely: