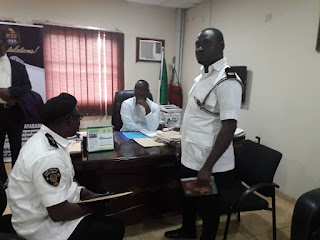 Collaborative efforts between Vehicle Inspection Officers (VIO) and the Benue Internal Revenue Service (BIRS), have began to yield results as the vehicle inspection office has recorded record breaking arrests.
Already poised to ensure safer roads and also enforce adherence to traffic laws the enforcement operation by vehicles inspection office in the month of August 2019  has led to 124 vehicles impounded and booked for non renewal of papers.
Out of this number, 112 vehicles were cleared while 12 are yet to be cleared.
This development is a fall out of an earlier meeting between the leadership of the VIO and the Executive Chairman of BIRS, Mr. Andrew Ayabam who had promised support for the VIO to ensure optimal performance of the VIO who he also acknowledged as an integral revenue source.
The Executive Chairman  further offered infrastructural support to the agency and promised to also assist them in anyway possible to ensure they carry out their mandate.
The VIO through its state Chief VIO Engr. Joe Deayev, reiterated their commitment to step up its operations and live up to her mandate.
He also thanked the Chairman BIRS for the support the VIO had erstwhile enjoyed in his previous tenure and sued for more support.
By Linda Ochagla at Friday, September 06, 2019