The collaborative efforts of the Joint Tax Force and the Benue Internal Revenue Service (BIRS), to rid the state of illegal tax points has yet again positive results.
The combined team today vacated an illegal road block at Gbor, Katsina Ala Local Government Area and arrested one of those operating the road block.
The culprit Mr. Ayoo Karityo was arrested extorting travellers and issuing receipts under the fake nomenclature, National Agency for Agricultural Produce, Haulage and Livestock.
He has since been put under police custody and will be charged to court on Monday, October 7,2019.
Meanwhile Executive Chairman, Mr. Andrew Ayabam has reiterated that the fight against illegal tax points will intensify until they are totally eliminated to ensure a healthier tax environment. 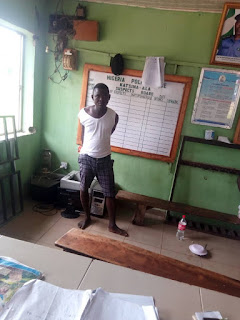