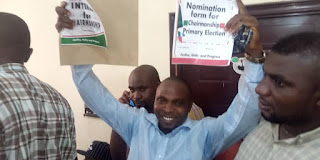 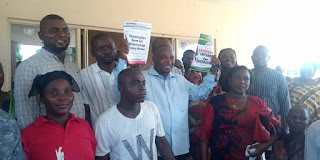 At a brief but colourful process at the PDP Secretariat in Makurdi, youths, women, the media and scores of party chieftains were all praises for Mr. Asawa for taking the bold step to rescue Ushongo.


Asawa Joseph, a National Delegate from Ushongo in the 2018 Special PDP National Convention is the first aspirant from Ushongo to access the nomination form.

Speaking at a reception in Makurdi, Coordinator of Benue Social Media Team, Jimin Geoffrey, represented by a political activist and media guru, Mr. Iorliam Amo Shija submitted that Asawa has indeed done the media industry proud by staking into the murky waters of politics with every commitment to offer quality and purposeful service going by his antecedents.

While promising to offer every possible assistance to the former deputy chairmanship candidate (Asawa) to coast home to victory, Mr. Shija said when governor Samuel Ortom is eventually back to the state, the media will formally present the aspirant who has been highly favoured by zoning, party loyalty and commitment for his consideration.

Mr. Asawa, a former Special Adviser to Ushongo Council Chairman (2012-2014) appreciated the various groups, individuals and party chieftains who had add shine to his aspiration expressing confident that Heaven, rather than mere mortals, will deliver victory to him.
By Linda Ochagla at Thursday, October 17, 2019