All federal roads in deplorable condition in Benue 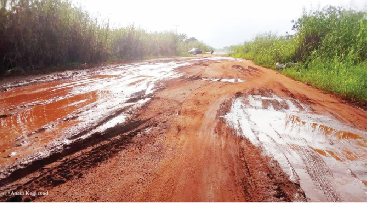 As is the case with Southeast and South-south geo-political zones earlier published, our correspondents in the Northcentral zone report that most of the federal highways are currently in awful conditions. Excerpts
We observed that all the federal roads in Benue State are currently in deplorable condition. They therefore need urgent intervention.
In August, a petrol tanker fully loaded with PMS, popular known as petrol, travelling from Port Harcourt to Makurdi attempted to avoid a pot hole in a settlement between Aliade-Makurdi federal highway, called Ahumbe in Gwer Local Government Area in Benue State but because of the bad condition of the road, the driver lost control and the patrol tanker tumbled spilling its content on the road.
There was fire outbreak in which over 70 persons lost their lives.
The Nation observed that some of the victims burnt beyond recognition, so they were given mass burial at the crash site.
Our investigation shows that there are many federal roads in Benue State which are also in deplorable conditions. They include Lafia in Nassarawa linking Makurdi in Benue State; Makurdi to Enugu and Benue Taraba roads. These roads are all in terrible shape.
However, it seems the worst federal government roads in Benue State are Makurdi-Naka-Ankpa road and Makurdi-Gboko-Ugbema-Katsina Ala,Gboko-Ihugh-Tse mker and Makurdi-Aliade-Otukpo road linking Enugu.
We observed that Makurdi-Naka and Makurdi-Otukpo roads have completely washed away, while there are chain gallops on the road allegedly as a result of lacked of maintenance.
When our correspondent plied the road, some big gullies were observed. These gullies on the main road have created flooding.
As a result of these, there is hardly a week without accidents or vehicle break-down on these roads.
Also a journey from Makurdi to Gboko which is supposed to take an hour, now takes two hours.
This is also the case for Makurdi-Alliade-Otukpo road. This road has been abandoned completely by commuters who preferred Makurdi-Naka-Otukpo which seems to better though it is also not too smooth.
A Commercial motor driver, Emmanuel Wada, who plied Makurdi- Ankpa – Okene in Kogi State on daily basis, told The Nation that he spent between N10,000 to N15,000 just to repair his bus every week because of the deplorable condition of the road.
Wada stated further that there is big security risk travelling on the dilapidated road as armed robbers usually lay ambush on the bad portion to rob passengers of valuables.
A farmer in Wannune, Tarka Local Government Area in Benue State, Damna Agba told The Nation that he pays so much to transport just one bag of groundnut to the market as vehicle owners now charge double the normal price even as they blame the poor state of the roads. The Nation also gathered that there is no ongoing work on the federal roads in Benue State despite the fact that raining season had worsened the condition of the roads.
A Member of the National Union of Road Transport Workers (NURTW), popularly called Pochose, said 80 percent of motor accidents in Benue are caused by bad roads. He called on the federal government to repair or construct its roads in the state.
At the office of the FERMA in Makurdi, Benue State, an official who pleaded anonymity however said once the raining season is over and the budget is passed, FERMA will step up repairs on the roads.
He said contracts have been awarded by the federal government on Makurdi-Lafia road and Makurdi-Gboko road, adding that very soon the contractor would start work.
By Linda Ochagla at Monday, November 18, 2019