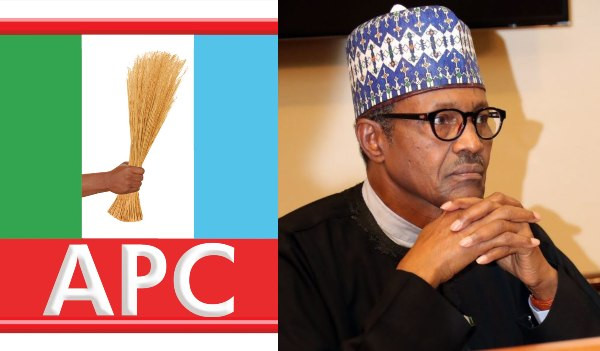 The All Progressives Congress (APC) seems to have severed its ties with its member who filed a lawsuit in which he sought for the amendment of the constitution to allow President Muhammadu Buhari contest for a third term in office.

Recall LIB reported that Charles Enya, a member of the All Progressives Congress (APC) in Ebonyi state who served as the organising secretary for President Buhari's campaign organization during the 2019 general election filed the suit before a Federal High Court in Abakiliki. He alleged that the two-term tenure limit for presidents and governors was “discriminatory” when compared with the provision made for lawmakers in Nigeria.

The APC however distanced itself from Enya in a statement released on Thursday November 28, by its spokesperson Lanre Issa-Onilu.

Insisting that the APC does not have space for “anti-democratic forces and charlatans”, Lanre stated that there is a possibility that Enya is being sponsored by the “desperate and misguided opposition”. He stated that they will use every legal means to thwart Enya's devilish efforts to create chaos in the country

“The All Progressives Congress (APC)read in the media about a purported legal action taken by a self-proclaimed member of the Party, Charles Enya, seeking an amendment of the constitution to allow President Muhammadu Buhari run for a third term in office,” the statement read.
“The Party had initially chosen to ignore him. However, it has become important to send a clear message to him and such other agents provocateurs.
“At the last National Executive Committee (NEC) meeting of the Party, President Buhari didn’t mince words and he is not the type that talks tongue-in-cheek. He pointedly said he would abide by the constitution and uphold the oath of office he took, swearing by the holy book he believes in. This he said was besides his advanced age which made such an idea beyond his contemplation.
“The NEC meeting highlights released to the media by the party equally quoted the President admonishing APC members, leaders and elected officials to reposition themselves in their respective constituencies so as to sustain the administration’s landmark legacies beyond 2023 when the President’s constitutionally permitted terms end.
“The president said history would not be fair to members if the APC collapses after his second term. What better proof is required of the President’s resolve to abide by the constitution on term limit?
“The Party is, however, by this statement sending a strong signal to such other busybodies like Charles Enya who may be contemplating testing the resolve of our government on our mission to work for the best for our country to be ready to face the law.
“As a party, we would not take kindly to anyone or group causing unnecessary distraction for this administration through anti-democratic actions,” he said.
“We have tried to find out the status of this character claiming to be a member of our party. If he turns out to be our member, we would ensure the party organ that has the responsibility to act on this matter promptly commence the process of expelling him.”