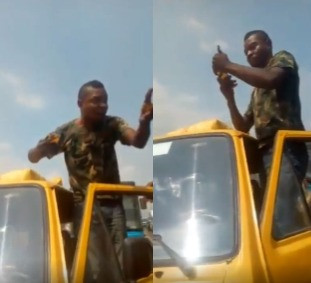 A video showing Army officials assaulting men of the Lagos State Traffic Management Authority LASTMA after one of them was stopped for flouting traffic laws, has surfaced online.

The soldier was caught using the road track meant only for the Lagos Bus Rapid Transit BRT along Onipanu road and when he was stopped by the LASTMA officials, he and one of his other colleague decided to engage them in a heated argument that led to one of the soldiers punching the LASTMA official.


Army officials caught on camera assaulting LASTMA officials after flouting traffic laws
A post shared by Lindaikejiblog (@lindaikejiblogofficial) on Nov 15, 2019 at 7:23am PST