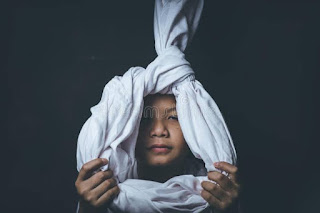 A nine year old girl Identified as Maria Abah was found dead in the bathroom.

An eye witness said the little girl attended a birthday party at their neighbors compound where the sad event took place.

The little girl was one among the other children who came to celebrate with their neighbors son on his birthday.

How she was able to hung herself is what makes so many people confused.
The prophetess whose son celebrated the said birthday, claimed she was not aware of the presence of a kid in her bathroom.

When contacted, the Police Public Relations Officer in the State, DSP Catherine Anene confirmed the incident.
Catherine said, a report was made to the C Division of the Nigeria Police in Ankpa ward of the death of the nine year old Maria Abah.

The PPRO Anene said, investigations are still ongoing to ascertain facts about the suicide case.