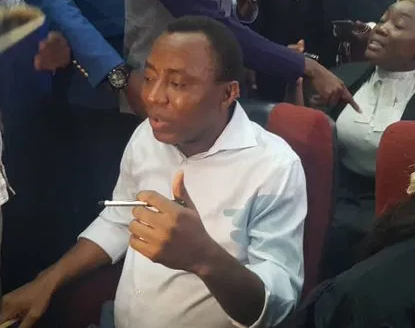 The Department of State Services (DSS) on Tuesday, November 19th expressed dissatisfaction over what its described as unruly behaviour of protesters who attempted to force themselves into the facility of DSS to seek the release of Sowore.

Peter Afunanya, the Public Relations Officer of the Service, said officials had been receiving threats since it insisted that the protesters were not the kind of persons to take possession of Sowore.

Afunanya disclosed this at a media conference in Abuja. The information officer also dismissed reports circulated on social media that officials of the service engaged in shooting during the protest was not true.

He said: “DSS is a respectable organisation that discharges its duties with utmost responsibility and accountability. We have standard operating procedures on the use of arms. So, our officials could not have used gun on any person.”

On the release of Omoyele Sowore, Afunayan insisted that the convener of the planned RevolutionNow protest would only be released upon proper documentation of persons willing to bail him. He said the service was prepared to release Sowore in line with the bail granted him by the court but waiting for persons to take his delivery through proper documentation.

According to him, Sowore was granted bail by the court and the service has received the order, but people who should take his delivery through proper documentation have not come. He said claims by some individuals that they were at DSS to take Sowore’s delivery without seeing officials of the service was not true.  Afunanya said the service would not release Sowore to miscreants, protesters and persons who were not qualified to stand for proper documentation for his release.
By Linda Ochagla at Tuesday, November 19, 2019