Father arrested in Niger state for chaining, locking up his 10-year-old son over refusal to attend school 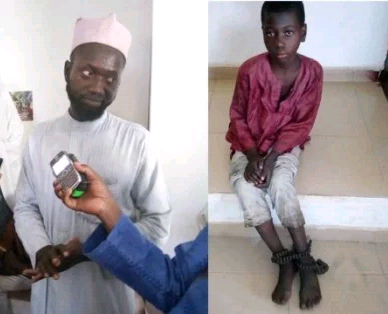 A man identified as Malam Abubakar Mohammed of Top Medical area, in Minna, Niger state, has been arrested for putting his 10-year-old son, Mohammed in chains and locking him up in the house.

The man, who was said to have been arrested sometimes ago for molesting a student in his Islamic school, put his son in chain on Tuesday over the child’s absenteeism from the UBE Primary School, Tunga in Minna, and refusal to attend Islamic school.

The young Mohammed said only the father can undo the chain as he has the key. The agency officials have to engage the service of a motorcycle repairer before the obstacle could be removed.

Speaking with newsmen on the development, the state official overseeing the Agency, Barrister Maryam Kolo said Abubakar’s neighbours alerted her office of the abuse.
“We got the information from the suspect’s neighbours and we promptly deployed our operatives who rescued the boy from where he was locked up by the father,” she explained.

She said Malam Abubakar is not a first-time offender, adding that he was once arrested by the agency and handed over to men of the Department of State Security Service for prosecution.

She said the agency would hand him over to the security agencies for prosecution after concluding its investigation.

In an interview with newsmen at the premises of the agency, Malam Abubakar said he took the action as corrective measures after repeated appeals to the son to mend his ways failed.

According to him, the son is fond of absconding from school and keeping late nights, adding that all the entreaties for him to change failed. He said he chained and locked the boy up on Wednesday morning after he went for the early morning prayers and did not see him in the mosque.
“We looked for him everywhere but couldn’t find him. In fact, he apparently did not sleep at home; so I went to where they normally hang out with his friends and saw him sleeping. I took him home and decided to use chain to prevent him from going anywhere until I returned from a naming ceremony but when I got back, I learnt some people from the human rights have taken him,” he explained.

The agency said the state government would take-over the welfare of the boy after the required counselling, adding that the custody would be transferred to the mother who is living in a community in Katcha local government area of the state.

The Niger State office of the National Human Rights Commission (NHRC), said it would follow up the matter to its logical conclusion, adding that the action was akin to torture and inhumane treatment which the Anti-Torture Act 2017 seeks to address.

The head of the commission, Malam Nuhu Mohammed, said the action was inhumane and degrading, pointing out that the Anti-Torture Act explicitly makes the right to freedom from torture, inhuman and degrading treatment non-negotiable.

He said the commission is collaborating with relevant government agencies and rights groups in fighting various abuses and right issues in the state.
By Linda Ochagla at Thursday, November 21, 2019