#FreeSowore: They offered us One million naira at gunpoint to suspend protest - Deji Adeyanju (Video) 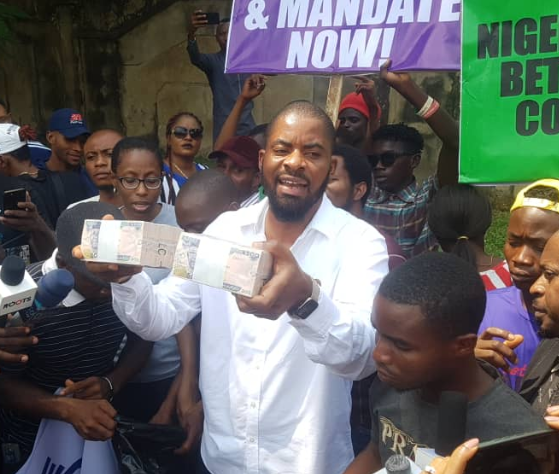 Activist, Deji Adeyanju, has accused the State Security Service of offering him bribe to shelve a protest demanding the release of Sahara Reporters publisher, Omoyele Sowore.

Adeyanju on Tuesday, November 12th in Abuja displayed N1 million cash he said was offered to him by agents of the SSS. The activist led several other protesters to the headquarters of the SSS in Abuja on Tuesday morning.

The demonstrators have been asking the SSS to comply with a federal court order for Sowore to be released from custody.

Sowore was last month granted bail by the Federal High Court in his ongoing trial for alleged treason and defamation of President Muhammadu Buhari. He met the stringent bail conditions on November 6, but the SSS has declined to release him.

Sowore’s lawyer, Femi Falana, said the SSS had been plotting to file additional charges against Mr Sowore in order to continue justifying his remand in custody, which he declared as effectively illegal since Wednesday when he met all conditions. After SSS controversially claimed on Friday that it was holding Mr Sowore because no one had come to pick him up,

Adeyanju held a sit-in outside its headquarters on Saturday to demand Mr Sowore’s release, but the secret police ignored the protesters. PREMIUM TIMES also confirmed Saturday that the SSS was not ready to release Mr Sowore, contrary to what it wanted the public to believe.