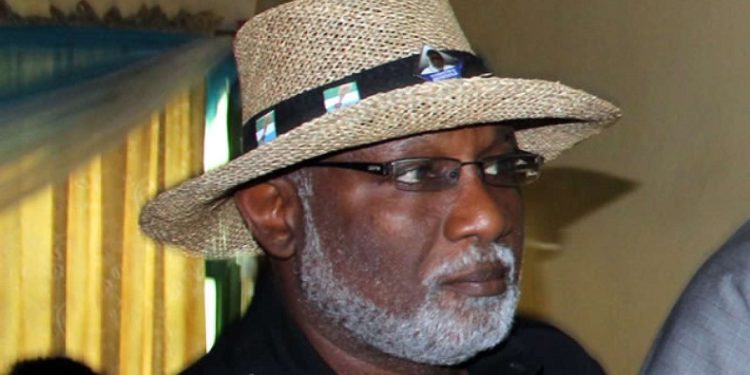 Gov. Oluwarotimi Akeredolu of Ondo State on Monday congratulated the Governor-elect of Bayelsa, Chief David Lyon, describing his victory in the Saturday’s governorship election as a major turning point for APC.
In a statement signed by Mr Ojo Oyewamide, Senior Special Assistant to Akeredolu on Media and Publicity, in Akure, the governor also congratulated his Kogi counterpart, Alhaji Yahaya Bello, on his re-election.
Akeredolu equally congratulated the APC – All Progressives Congress – for victory in the elections.
“The outcomes of the elections in the two states have, once again, endeared the APC to the hearts of the people.
“It is particularly heart-warming that Al­haji Yahaya Bello is returning as Governor of Kogi. I wish him the best as he continues to lead the good people of the state.
“For Chief David Lyo­n, the Governor-elect of Bayelsa, his emergence is a major turning point.
“Although, Edo had blazed the trail for long, the journey to plant the seeds of our great party in the Niger Delta has not been easy, understandably.
“The Bayelsa feat is a great leap. All those who toiled to bring to fruition, this comforting be­rth deserve commenda­tion,” he said.
The governor described APC’s victory in Bayelsa as the needed elixir for the party to take firm roots in the Niger De­lta.
“The real victory belongs to those who sacrificed their ti­me and energy for the successful conduct of the two election­s.
“Most profoundly, therefore, I specially salute the quality leadership individually provided by Governors Nasir el-Rufai and Abubakar Badaru of Kaduna and Jigawa states, respectively.
“As Chairmen of the APC National Campaign Councils for the two elections, they displayed dexterity on all fronts with candour and thoroughness. All members of both councils deserve no less commendations.
“INEC, security agencies and even the participants also contributed in no small measure to the outcomes,”Akeredolu said.
(NAN)
By Linda Ochagla at Monday, November 18, 2019