Man And His Family Wiped Out in Makurdi

Man And His Family Wiped Out  In Makurdi 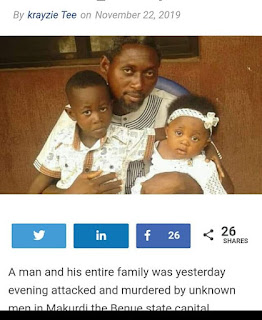 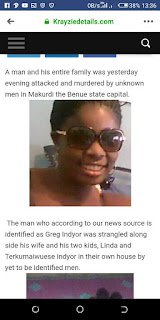 
A man and his entire family was yesterday evening attacked and murdered by unknown men in Makurdi the Benue state capital.

The man who according to our news source is identified as Greg Indyor was strangled along side his wife and his two kids, Linda and Terkumaiwuese Indyor in their own house by yet to be identified men.

This incident however took place at Yogbo road North bank in Makurdi the Benue state capital.
The reason for this family sweep is not known but our news sources believed that it is not a robbery case as no properties were robbed before, during or after the incident.
By Linda Ochagla at Saturday, November 23, 2019