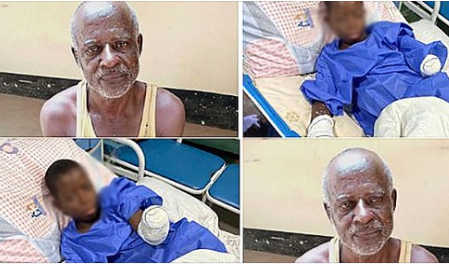 Last week, a sad story of 13-year-old Ovey Friday, pictured above, who lost both his hands after his stepmother took him to a native doctor and coals of fire were heaped on his tied hands after he was accused of being a wizard.

The stepmother had accused him of sleeping with her in the dream and she needed him to confess and also get the spirit out of him. She took him to her native doctor in Wulko Community, Nasarawa Eggon Local Government Area, Nasarawa State where hot coals were placed on the boy's tied hands. The incident led to a permanent deformity of his right hand while the left hand was amputated at an Abuja hospital on November 14th.

When interrogated, Musa denied claims of burning Ovey’s hands, insisting he only rubbed a herbal substance on his hands.

The victim however dismissed the herbalists claim. Ovey in a chat with Channels TV, said

''He is lying, he burnt my hands and the whole act didn’t happen in the presence of my stepmother and paternal grandmother. They were in another room and we were in another” .

Ovey’s father, Friday who did not show up after the October 28th incident amidst several phone calls was also not present during the surgery. He, however, arrived Wulko community in Nasarawa Eggon local government area of Nasarawa state, Monday,18th November which is three weeks after the ordeal and is yet to visit his son at the hospital.

Commenting on the arrest, Bola Longe, the state police commissioner, said the suspects will be charged to court.

“They are being subjected to exhaustive interrogation to know the veracity of their statement. We will definitely charge them to court when we complete the investigation and it will be very soon and we want to use the case to send a message to members of the public particularly those who are saddled with the affairs of taking care of children. No one should show wickedness any child and quine who does so will face the full wrath of the law,” he said.