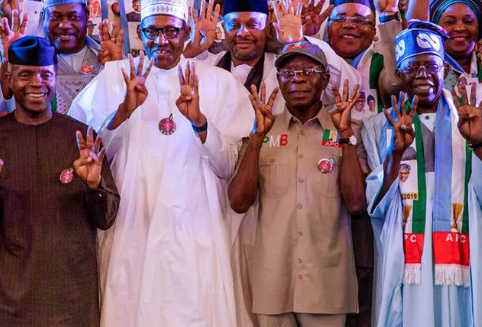 President Buhari has charged the leaders of the All Progressives Congress (APC) to work hard to ensure that the party survives beyond the end of his tenure in 2023.

The President, who spoke at the meeting of the National Executive Committee (NEC) of the party in Abuja, said that history would be unkind to the party leaders if the party collapses at the end of his administration.

He also said the party leaders have a responsibility to make the party attractive to their constituents, saying that “anybody who fails to maintain the respect of his constituents and is thrown out, it is his problem.

“Like the chairman has said, all those who left us to the upper house, none of them were voted by his constituents. You want to take our people for granted, but they know what they are doing, The aim is that, as I mentioned yesterday, history will not be fair to us outright if the APC collapses at the end of this term.
“History will be fair to us if the APC remains strong and not only holds the centre but makes gains. People will reflect with nostalgia that once upon a time, the builders of APC made a lot of sacrifices, worked very hard.
“The sacrifices are physical, material and moral to make sure that we maintain the leadership, politically, of this system. This is what we should all aim at and ensure that our constituencies understand us and follow us to this great objective.
“What we did for you the executive, NWC is bottom to top. You must make sure that people elected to be responsible from polling units to wards to local governments to states and here are respected in their respective constituencies.
“This is the only way we can make this party survive. This is the only way history will be kind to us that we have led with absolute concern for the country and for the people. If for any other reason you divide the party at any constituency and it causes failure, then be prepared that history will not recognize you as a leader at any level at any time.”

Speaking further, the President noted that the relationship between the executive arm of government and the legislature under the current dispensation has been commendable, noting that the National Assembly had been cooperative, which he said had allowed the administration to make remarkable progress.

He said: “Yesterday, I had to mention our relationship. And when I say ‘our’, I mean the executive and the legislature. And I was constrained to tell you there was a time I called the Senate President and the Leader of the House and told them that to sit on a budget for seven months is not politics nor is it hurting the President, whoever he is. It is hurting the country and the people we swore by the books we believe in, to serve them whole-heartedly.
“For that reason, I was pleased to mention yesterday that the 9th Assembly, you can see and read in the papers, they have shown so much commitment; they sit down on important issues and we make a lot of progress. This relationship, we will try and maintain because there are a lot of things that will not go public.
“We cannot allow those things to go public. But I want to tell you that we are making a lot of progress and what people fail to do is to appreciate the progress that this administration has made; what we inherited when we came in 2015.”