A tragic incident occurred on Wednesday December 25, as a man identified as Onyeocha Umuokwu was allegedly shot dead by a policeman.

The incident reportedly occurred at the home of one Engineer Eze in Alor Idemili South Local Government area of Anambra state.

Eyewitnesses alleged that the deceased was killed by a stray bullet shot by a policeman aiming at a fleeing cow in the community.

#SO SAD...
Onyeocha Umuokwu was shot by a police officer at Engineer Eze house yesterday been 25th December 2019, in Alor idemili south LGA Anambra stat
The news have it that a cow cut the rope they use to tied it and started running then the police officer on the duty now try to shoot the cow but mistakenly shot and killed this Alor popular/jovial man Onyeocha Umuokwu na Alor.
Very horrible... 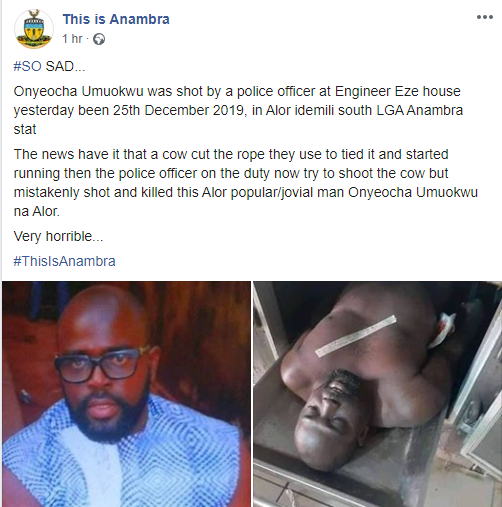