Angry mob attack a rapist in Calabar, dump body in a refuse bin 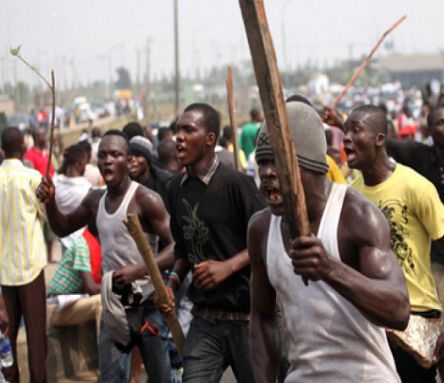 An angry mob in the early hours of Wednesday, December 25th lynched a suspect for allegedly robbing and raping a girl in Calabar, Cross River State.

The incident occurred on Ekong Etta Street by Okoro Agbor in the early hours of Wednesday when an angry mob pursued a suspected thief who allegedly raped his victim.

A witness said he suspected the rapist was trailed by the mob who later beat and dumped him in a waste bin, close to Apostolic church where he later gave up his ghost.

He said: “They were three (3) of them that committed the act, but the other two ran away, but he (the victim) couldn’t as the mob caught up with him and mobbed him.
“People said he’s a first-timer and that he followed the other two who have been robbing the area and going scot-free. They even raped the girl they robbed.
“The incident happened in the early hours of Wednesday and the screaming from the girl alerted the mob who later came to her rescue.”