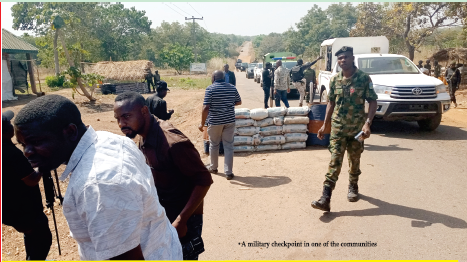 In the past 10 years, Tiv farmers in Benue, Taraba and Nasarawa states have come under sustained attacks by herdsmen. The crisis the attacks provoked between herdsmen and farmers has consumed many lives and property, with more than 500,000 persons displaced internally.
The crisis had defiled any known solution until the army deployed its troops in an operation code named Operation Whirl Stroke, headed by Major-General Adeyemi Yekini.
While the crisis lasted, particularly among the people inhabiting the bank of River Benue, criminal elements took advantage and hid under it to commit all manner of atrocities, including armed robbery and kidnapping.
The settlements  mostly affected in the bloody crisis include Katsina Ala, Abaji,  Haaga and Abaji Gbishe in Katsina Ala Local Government Area; Gbajimba, Kaseyo and  Uvir in Guma Local Government Area (the country home of Governor Ortom); and Ayilamo, Tse Dzungwe, Uzer,  Anyibe, Tse Ibor, Azege, Gbeleve and Tiza in Tombo Ward, Logo Local Government Area in Benue State.
In all the aforementioned communities, there was no single soul living in them as they were overrun by herdsmen who killed their men, women and children, set their houses ablaze and destroyed their foodstuffs and farmlands, leaving tears and blood on their trail.
The settlements were completely deserted and the killings threatened the state’s reputation as the food basket of the nation. Farmers were no longer go to farm and even had to flee their homes to take refuge in camps where they survived on charity.
For three years, men and officers of Operation Whirl Stroke fought the bandits and liberated the occupied communities from them.
Gbishe, Abaji, Anyibe, Tse Zungwe and Ayilamo were the massive yam producing communities that suffered most.
The bandits took total control of the towns and their markets and formed a kind of parallel government as they collected taxes from both buyers and sellers.
Anyone who dared resist them was killed instantly as sophisticated weapons were freely used in those areas.
Schools, hospitals and other public facilities were shut down. The highway connecting Takum in Taraba State with Katsina Ala in Benue was deserted and remained under the control of the bandits who operated with impunity.
However, life is gradually returning to these communities as troops have wiped out the bandits.
Last week, Governor Samuel Ortom told his audience that he planned to meet President Muhammandu Buhari over the planned withdrawal of troop of operation whirl stroke from Benue.
At the weekend, the acting Director of information Brigadier-General Oyeama Nwachuku, led some journalist to the operation base of the military and the communities liberated from bandits and herdsmen.
At Gbishe town, Katsina Ala Local Government Area, inhabitants of the area, who are mostly farmers, told our correspondent they want the military to stay with them.
In an exclusive interview with The Nation during the tour, a farmer, Chief Kwagh Edward, recalled that he and other inhabitants of the community were chased away from their land for years, but due to the efforts of the military, he was back to his ancestral home in Gbishe town with his family and was back to farming.
Another resident, who identified himself simply as Chief Kwaghaondo, said: “If the military should leave us now as it is being rumoured, all the effort put into flushing out the bandits will be in vain.”
He appealed to the federal government and Governor Ortom to intervene in the matter.
It was the same story in Logo, Ukum and Guma Local Government Area as farmers who spoke with The Nationpleaded with President Buhari to prevail on the military not to leave their settlements as there are fears that herdsmen may return to attack and kill them.
Brigadier-General Nwachukwu had told The Nation that the military’s peace mission had been achieved and troops would soon begin a gradual withdrawal.
By Linda Ochagla at Saturday, December 28, 2019