Boxing day and how it got its name 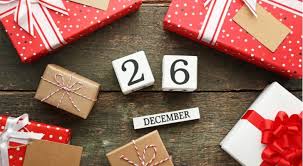 Ever wondered what Boxing Day is, what it means, and where this unusual name comes from? You may find the answers interesting.
What is Boxing Day?
Arguments come thick and fast as to why, and we hope you find the answers below interesting. But firstly, it has nothing to do with the sport of boxing.
Boxing Day is a national Bank Holiday in late December, a day to spend with family and friends and to eat up all the leftovers of Christmas Day. The origins of the day, however, are steeped in history and tradition.
Why Is It Called Boxing Day?
Arguments abound on the origins of the name Boxing Day. All the answers below are valid, so maybe it is one, or even all of them.
The name is a reference to holiday gifts. A ‘Christmas Box’ in Britain is a name for a Christmas present. Boxing Day was traditionally a day off for servants and the day when they received a ‘Christmas Box’ from the master. The servants would also go home on Boxing Day to give ‘Christmas Boxes’ to their families.
The name is a reference to charity drives. A box to collect money for the poor traditionally and placed in Churches on Christmas day and opened the next day - Boxing Day.
The name refers to a nautical tradition. Great sailing ships when setting sail would have a sealed box containing money on board for good luck. Were the voyage a success, the box was given to a priest, opened at Christmas and the contents then given to the poor.
When is Boxing Day?
Boxing Day is the 26th December and is a national holiday in the UK and Ireland.
Activities on Boxing Day
Boxing Day is a time to spend with family or friends, usually those not seen on Christmas Day itself. In recent times, the day has become synonymous with many sports. Horse racing is particularly popular with meets all over the country. Many top football teams also play on Boxing Day.
Boxing Day is also a time when the British show their eccentricity by taking part in all kinds of silly activities. These include bizarre traditions including swimming the icy cold English Channel, fun runs, and charity events.
Fox Hunting on Boxing Day
Until 2004, Boxing Day hunts were a traditional part of the day, but the ban on fox hunting has put an end to this in its usual sense. Hunters will still gather dressed resplendently in red hunting coats to the sound of the hunting horn. But, since it is now forbidden to chase the fox with dogs, they now follow artificially laid trails.
The New Boxing Day Sport - Shopping
Another ‘sport’ to emerge in recent years is shopping. Sales used to start in January, post-New Year, but the desire to grab a bargain and for shops to off-load stock means many now begin on Boxing Day.
Boxing Day in Ireland
In Ireland, Boxing Day is also known as "St. Stephens Day" named after the Saint stoned to death for believing in Jesus. In Ireland on Boxing, there was once a barbaric act carried out by the so-called "Wren Boys." These boys would dress up and go out, and stone wren birds to death then carry their catch around the town knocking on doors and asking for money, the stoning representing what had happened to St Stephen. Thankfully, this tradition has now stopped, but the Wrens Boys still dress up but instead parade around town and collect money for charity.
Food and Drink on Boxing Day
With guests often popping in for a snack or tipple the food and drink on Boxing Day are more relaxed than Christmas Day.
Lunch will usually be a buffet or leftovers from Christmas lunch. Baked Ham is a popular Boxing Day meat along with pease pudding and of course, mince pies with brandy butter or a slice of Christmas cake or other dessert are almost obligatory.
By Linda Ochagla at Thursday, December 26, 2019