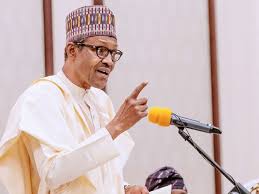 President Muhammadu Buhari on Wednesday declared that the resolution of conflict situations in African countries remains a key component in the overall development of the continent.
He spoke during the opening session of the ongoing Aswan Forum for Sustainable Peace and Development in Africa in Egypt and was contained in a statement signed by his spokesman, Femi Adesina.
According to Buhari: “As Africans, it is important to focus on the issues of conflict prevention and resolution. Conflicts have devastating effects on our societies and they militate against our progress. In this regard, the need to silence the guns cannot be overemphasized.”
Buhari equally emphasized that massive investment in transportation infrastructure was necessary for African economic resurgence as this would facilitate the African Free Trade Area Agreement recently signed on by the continental leaders.
“Africa should embark on the provision of transport connectivity by enhancing the development of roads, rail, and air links which will ease the free movement of persons, goods and services within the continent. In this regard, we in Nigeria have already commenced an aggressive drive to upgrade our rail transport system and road networks across the country.
“We should furthermore promote free trade within and amongst Africa and Africans especially now that we have launched the African Free Trade Area Agreement,” he said.
In order to realize its Pan-African vision of an integrated, prosperous and peaceful Africa driven by its own citizens and representing a dynamic force in the global arena, President Buhari declared: “We in Nigeria have already taken the strategic decision to bring down barriers that have hindered the free movement of our people within the continent by introducing the issuance of visa at the point of entry into Nigeria to all persons holding passports of African countries with effect from January 2020.”
The Nigerian leader also stated that Africa must take its destiny in its own hands by minimizing reliance on donor funding for the execution of its vital peace, security and development agenda.
According to him, “Nigeria is not only a host to our sub-regional body ECOWAS but has also been supporting substantially the ECOWAS budget up to about 60 per cent.
“Nigeria has been funding by almost at 100 per cent the operations of the Multinational Joint Task Force (MNJTF) fighting Boko Haram Terrorists in the Lake Chad Basin.”
President Buhari also harped on the fight against corruption and inclusive growth: “The menace of corruption undermines our efforts to achieve sustainable development and realize the goals of the AU Agenda 2063. It is also important to attach great priority to the promotion of good and inclusive governance as we equally strive to empower our women and youth.”
The President once again used the opportunity to draw global attention to the recession of the Lake Chad and its attendant economic consequences for the region.
“The issue of climate change should be given the due attention that it deserves. The effects of Climate Change are at the root of some of the conflicts in parts of the continent. This is why we must focus on the issue of recharging the Lake Chad which used to provide a livelihood to over forty million people in the region. It is difficult to expect durable stability in the region without restoration of the shrinking lake.
He urged African leaders to see education as a key tool for the transformation and repositioning of our continent, saying, “Africa would need to heavily invest in education and capacity building. Education creates opportunities and holds the key for a better and prosperous future of our people.”