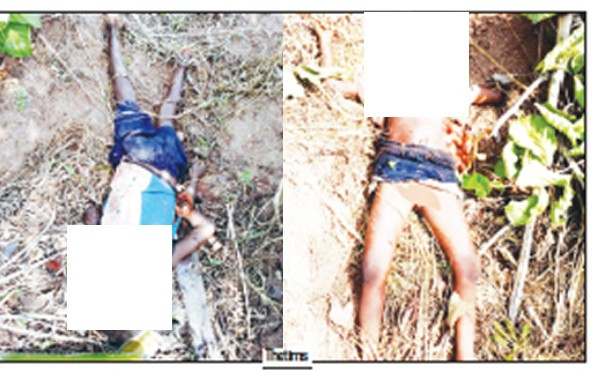 A man identified as Chinasa Ogbaga from Egwuagu Okpuitumo community in Abakaliki Local Government Area of Ebonyi State has been arrested by the state Police Command for killing his two children and and leaving his third child with life-threatening injuries.

The middle-aged man who was seen sharpening his machete on Saturday December 21, slaughtered his six-year-old son Chikamso Ogbaga and four-year-old daughter Chizaram Ogbaga after taking them to a nearby bush one after another.

His two-year-old son Emmanuel Ogbaga who was left with life-threatening injuries was rushed to Alex Ekwueme Federal Teaching Hospital (AE-FETHA), Abakaliki where he is receiving treatment.

New Telegraph reported that the mother of the suspect who got divorced from his wife in February 2019, claimed her son who resides in Onitsha, Anambra state is an Ogbanje (possessed by evil spirit).

“I discovered recently that my son has an Ogbanje (was possessed by evil spirit). I think that must have been the cause of his action.”

Uncle of the suspect, Mr. Emmanuel Nwambam described the incident as shocking and also revealed that Chinasa confessed to the crime after being apprehended by villagers.

“Chinasa is a vulcanizer, based in Onitsha, Anambra State. He returned home as usual and the following day, he went with his mother to the farm. When they returned from the farm, he was seen sharpening a machete on that fateful evening, which he later used to carry out the barbaric act.
“Unfortunately, nobody knew his plan. After committing the crime, he met a vigilante in the village who interrogated him for moving with a machete at night. From there, it was discovered he had butchered his children.”

The State Police Spokesperson, Loveth Odah said the incident which was been reported to the state command by the Divisional Police Officer in charge of Ekumenyi Division is currently being investigated.
By Linda Ochagla at Monday, December 23, 2019