...wiped tears as judgment was read 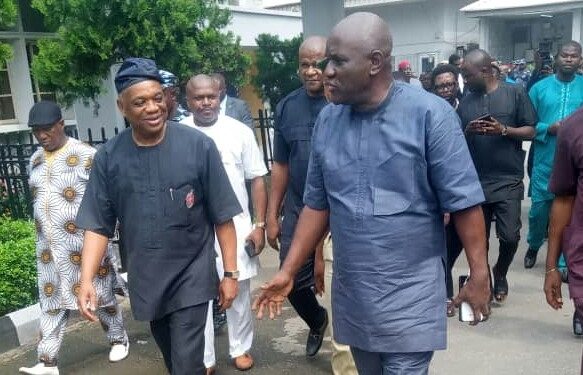 Kalu and Udeogu leaving the courtroom after their sentence

Former Abia State Governor, Orji Kalu, who was sentenced to 12 years in prison for fraud, has suggested that he has a role to play in the national politics of 2023.

Kalu, who is the Senate’s Chief Whip smiled at reporters and said, ‘2023, here we come’ as he was led out of the courtroom by Correctional Services officials after his sentencing.

He was also seen asking prison warders, “where are you taking us to?”.

Kalu then begged the prison warders not to handcuff him in public.

The former governor, who appeared shaken, said, “Where are you taking us to now? Please don’t handcuff me. I will follow you.”

A short while earlier, Kalu wiped tears from his eyes with a white handkerchief as Justice Mohammed Idris began reading an abridged version of the 228-page judgment.

Kalu’s associate, Udeogu, was sentenced to 10 years in prison while the company which was used in perpetrating the fraud, Slok Limited, was ordered to be wound up by Justice Idris Mohammed.

The case began in 2007, 12 years ago, when they were first arraigned for the offences, but before a different judge.

In an amended 39 counts, the Economic and Financial Crimes Commission (EFCC) proved that they conspired and divert N7.65bn from the coffers of the Abia State