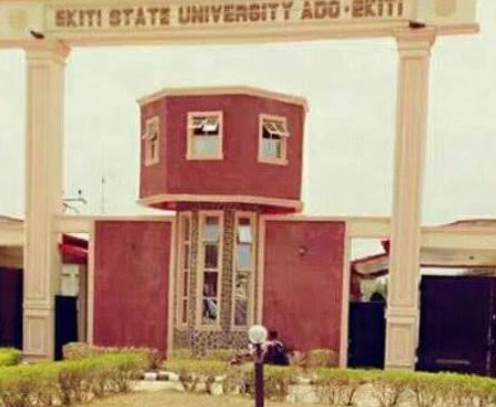 Workers of the Ekiti State University, Ado Ekiti grounded academic activities at the institution on Monday, December 9th over mass retrenchment in the school.

The institution had on December 5 sacked over 900 workers institution who alleged to have been recruited between 2016 and 2017, during the tenure of Governor Ayodele Fayose, have been sacked.

Discrepancies were said to have been found in the certificates of some of the affected workers, while others were also found not to possess the requisite certificates from the primary level. The lecturers who protested within and outside the institution’s campus blocked the entrance gate as early as 7: 45am and chanting solidarity songs.

The protesting lecturers barricaded major roads and prevented vehicles from either leaving or entering the campus. The protesting workers who were led by the major in various unions in the institution under the aegis of Joint Action Committee were seen carrying placards with various inscriptions and chanting solidarity songs.

Addressing journalist, the NLC chairman in Ekiti state who dubbed as the SSANU chairman of the institution, Mr Kolawole Olatunde said the struggles would be a fight to finish between Labour and the management. He said the action of the management was uncivilized and inhuman .

The labour leaders, equally, urged Governor Kayode Fayemi to call on the institution’s authority to reverse the decision to guarantee industrial harmony.
By Linda Ochagla at Tuesday, December 10, 2019