'Falana wants to score cheap media publicity by asking me to apologise to Sowore, Dasuki'- Attorney General of the Federation, Abubakar Malami, says 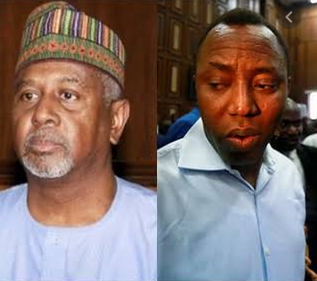 The Attorney-General of the Federation and Minister of Justice, Abubakar Malami (SAN), has said that the release of publisher and convener of Revolution Now protest, Omoyele Sowore, and a former National Security Adviser, Sambo Dasuki, were done out of compassion.

Malami made this known in a statement released by his spokesperson, Dr Umar Gwandu, while reacting to a statement issued on Sunday December 29th by Sowore’s lawyer, Femi Falana (SAN). Falana had demanded that Malami apologizes to Sowore and Dasuki for allegedly offering wrong advice to the Federal Government which resulted in the prolonged detention of Dasuki for four years and Sowore for over four months despite different court orders granting them bail.

Reacting to Falana's comment  demanding an apology to Dasuki and Sowore, Malami in his statement, said he is disappointed at the Senior Lawyer for making such demands when he knows that the release could only have been granted based on valid reasons which includes compassion.

“First, it is beyond doubt that the Federal Government of Nigeria or any prosecuting  authority has been vested with constitutional right of appeal in criminal prosecutions. These rights extend to rulings on bail and right to seek to vary terms of bail, among others. Thus, in any circumstance where this right is waived by the prosecution, it can only be for valid reasons, including compassion, after all connected issues have been duly considered.” the statement read

He accused Falana of trying to garner media hype in condemning the Federal government's kind gesture of releasing Sowore and Dasuki.

“It is further appalling to note that in a bid to garner media hype in condemnation of a valid governmental action taken in good faith and in the interest of the general public, Mr Falana, SAN, resorted to quoting non-existing sections of the constitution by stating that,  Mr Malami (SAN), should have apologised to Col. Dasuki (retd.) and Mr Sowore in accordance with Section 32(6) of the 1999 Constitution…It is unfortunate that a senior member of the bar could resort to concoctions and fabrications of non-existing provisions just to score cheap media publicity.
It is important to highlight that the statement issued by the Office of the Attorney General of the Federation and Minister of Justice, which Mr Falana was allegedly responding to, did not howsoever state that the duo of Dasuki and Sowore were released further to the constitutional provisions on Prerogative of Mercy.
A lawyer of Mr Falana’s status should thus desist from stretching arguments beyond reasonable limits in order to score cheap political points. It is a common knowledge that Prerogative of Mercy and compassion simpliciter are two different concepts.” the statement read