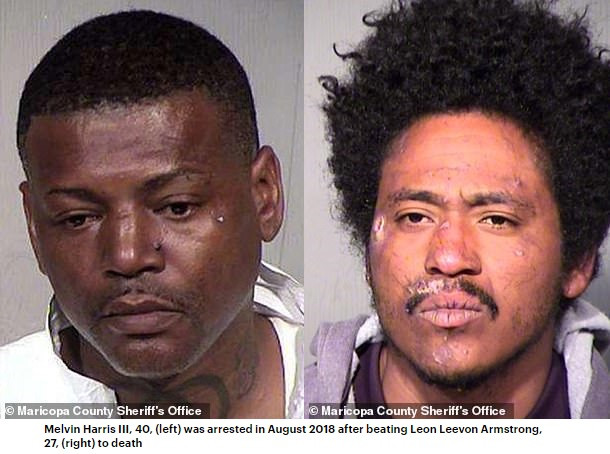 An Arizona father who beat a man to death after he tried to violate his daughter has been jailed for eight years.

40-year-old Melvin Harris III was arrested in August 2018 after beating Leon Leevon Armstrong, 27, to death in the parking lot of a convenience store in Phoenix, Arizona.

According to court records, Melvin had gone to pick up his teenage daughter and her two friends at the QT near 19th and Dunlap avenues just after 11:30 p.m. on Aug. 2. Harris was waiting in the parking lot when a man approached and asked him for money, records show. Harris gave him change and the man walked into the store.

While Harris was waiting in his car for his daughter and her friends, they told him Armstrong had tried forcefully to get into the bathroom stall she was in.

Security guards were reportedly alerted and police were called but Harris still went ahead to beat Armstrong to death in the parking lot.

Witnesses said Harris punched him in the face and kick and stomp on him, records show. Following the incident, Harris got into his car and drove home.

The man died in the hospital from brain swelling, a nasal fracture and loss of oxygen.

Harris was later arrested and charged with second-degree murder but after he accepted a plea deal, the charge reduced to manslaughter. As part of the agreement, he will spend eight years behind bars.
By Linda Ochagla at Sunday, December 15, 2019