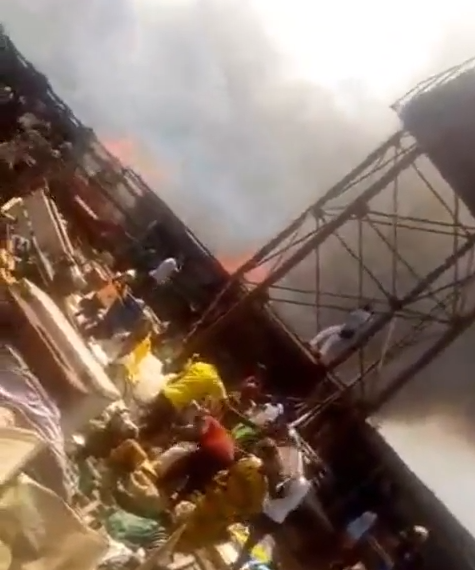 A tragic incident occurred today in Benin as the popular Ekiosa market was razed down by fire.

Facebook user, Zion Ose who shared a video from the scene of the incident, alleged that the State's Fire Service who were notified of the incident said they didn't have water.

Ekiosa market, Benin, on fire. Over 1hour and there's still no sign of fire service men. They said they don't have water. Yet, over 30billion has been budgeted for the renovation of a building for fools!
Truth is, Nigeria is a mess. A joke. A murderer! You need to hear the sound of this raging fire like it's war.


Fire razes Ekiosa market in Benin 😢😢
A post shared by Lindaikejiblog (@lindaikejiblogofficial) on Dec 22, 2019 at 10:57am PST 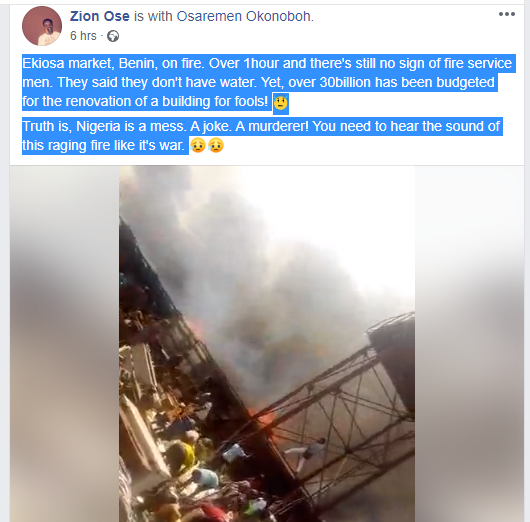 However the Edo State government who confirmed the incident, said they are investigating allegations of suspected arson over the market fire.

According to the Special Adviser to the Edo State Governor on Media and Communication Strategy Mr. Crusoe Osagie, the increased fire incidents in markets around Benin metropolis may bear political connotation.

“The state government has commenced investigation into the Ekiosa fire incident as we have received preliminary information indicating that the fire may have been caused by arsonists, who are bent on painting the government in bad light.
“The information we have show that the arsonists may be working on the instructions of the disbanded Edo Peoples Movements (EPM), who are shopping for avenues to discredit the Governor Obaseki-led government.
“It is also curious that when officials of the Fire Service and other stakeholders in emergency response mobilised to the site of the fire at Ekiosa market, they were attacked and chased away by the arsonists. This is a serious offence and government will not condone the action of these persons, as anyone found culpable will be made to face the full wrath of the law.
“Relevant stakeholders are being rallied around to carry out the investigations into the incident to establish the case of arson, even as government agencies and departments responsible for emergency response are being debriefed on what transpired when they responded to the incident.
“We will provide support to the affected traders to enable them return to their businesses. We are mindful that these traders would have stocked wares for the festive season. The state government will ensure that they’re fully compensated.”