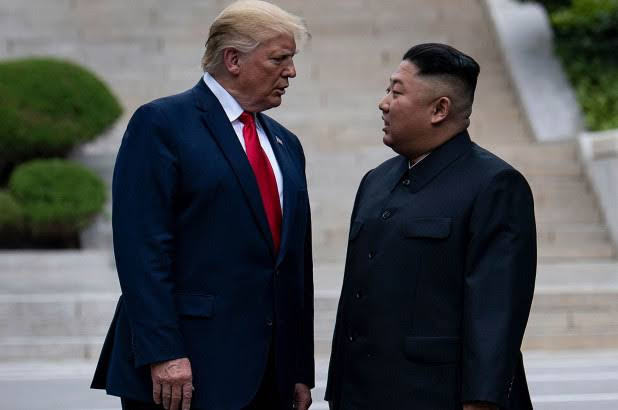 US President Donald Trump has come out to warn North Korean leader, Kim Jong Un that he would be making a very big mistake if he restarts missile tests, a day after reports from North Korea revealed that the Hermit nation had carried out a very 'important test' in its missing testing site.

Trump who still points to his 'relationship' with Kim as the reason both countries are in denuclearization talks said Russia , China , NATO and the whole world agree that North Korea must denuclearize so any plan of Kim to deviate from the agreement both leaders signed in the Singapore summit, will have bad consequences for North Korea.

Trump taking to Twitter said;
Kim Jong Un is too smart and has far too much to lose, everything actually, if he acts in a hostile way,'
He signed a strong Denuclearization Agreement with me in Singapore.
'He does not want to void his special relationship with the President of the United States or interfere with the U.S. Presidential Election in November.
'North Korea, under the leadership of Kim Jong-un, has tremendous economic potential, but it must denuclearize as promised.
NATO, China, Russia, Japan, and the entire world is unified on this issue!'

The test was conducted shortly after the Asian country announced denuclearization talks with the U.S. were off the negotiating table.

Trump told reporters in June 2018 after his first summit with North Korean leader Kim Jong Un in Vietnam that North Korea had pledged to dismantle one of its missile installations, which U.S. officials later identified as Sohae.

But surprisingly on Saturday, North Korea's ambassador to the UN, Kim Song, said that the  'sustained and substantial dialogue' sought by the U.S. was a 'time-saving trick' to focus on Trump's 2020 reelection bid with state run media, KCNA telling the American government to choose which 'Christmas present' it will receive from North Korea thing December.
By Linda Ochagla at Monday, December 09, 2019