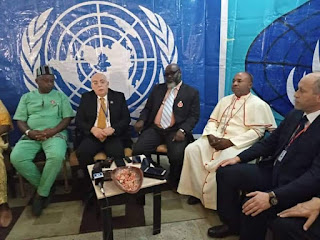 The International Human Rights Commission, IHRC, headquartered in Geneva, Switzerland is set to present its highest award of 'Order of Pride of Africa and Nelson Mandela Medal for a Long Walk to Freedom' to Benue State Governor, Samuel Ortom for his selfless contributions to the peace and security of Benue and Nigeria in general.

Dr. Bou-Said stated that Governor Ortom has been recognized for the award owing to his determination for the protection of human rights and working with the State House of Assembly to enact laws that improve the living conditions of his people.

He said the International Human Rights Commission was established in 2003 with the mandate to ensure that the rights of the people are protected, saying that Benue was one state implementing human rights in all its aspects.

Dr. Bou-Said who decried human rights abuses going on in parts of the country noted that Nigeria which is one of the biggest countries in Africa should lead the way for others to follow in implementation of all human rights declarations.

African Head of IHRC, Dr. Innocent Ahure described the award as the Hall of Fame for leaders on the continent who have distinguished themselves in service to humanity.

“I want to congratulate the people of Benue state for having such a wonderful man. The governor who made sure that the life of his people are peaceful and protected. Peace is very very important to man’s survival. Without peace, there will be no progress or development,” he added.

The "Order of Pride of Africa" award to Governor Samuel Ortom is coming a few days after he was decorated as the "Most Courageous Statesman and Defender of Humanity" by African Newspapers of Nigeria and "Best Governor on Security, Conflict Resolution and Peace Initiative by the Nigerian Pilot Newspaper.
By Linda Ochagla at Saturday, December 14, 2019