Joshua Vs Ruiz 2 : Mike Tyson, Deontay Wilder, Lennox Lewis, Tyson Fury & other heavyweight boxers give their thoughts on tonight's 'fight of the year' 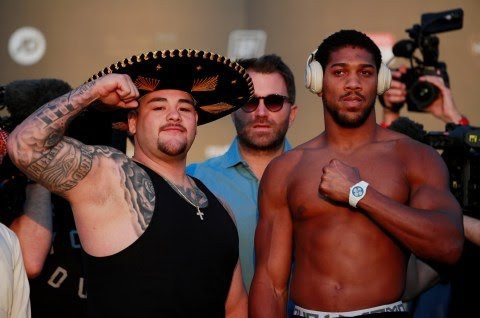 Ahead of tonight's boxing match of the year between Anthony Joshua and Andy Ruiz Jr, heavyweight boxers both current and retired have come out to give their thoughts on the must see match tagged 'clash of the Dunes' in Saudi Arabia

Ruiz shocked the boxing world when he beat Joshua in the 7th round in June to take over Joshua's four heavyweight belts, changing his life forever in the process.

In Friday's weight in, Ruiz weighed almost a stone heavier while Joshua weighed a stone lighter and while rivals like Wilder and Fury believe Ruiz will beat Joshua, boxing legend Mike Tyson believes anyone will win..
Below are thoughts from the heavyweight boxing champions in a match that a lose or win for any of the fighters will have dramatic implications on their career. 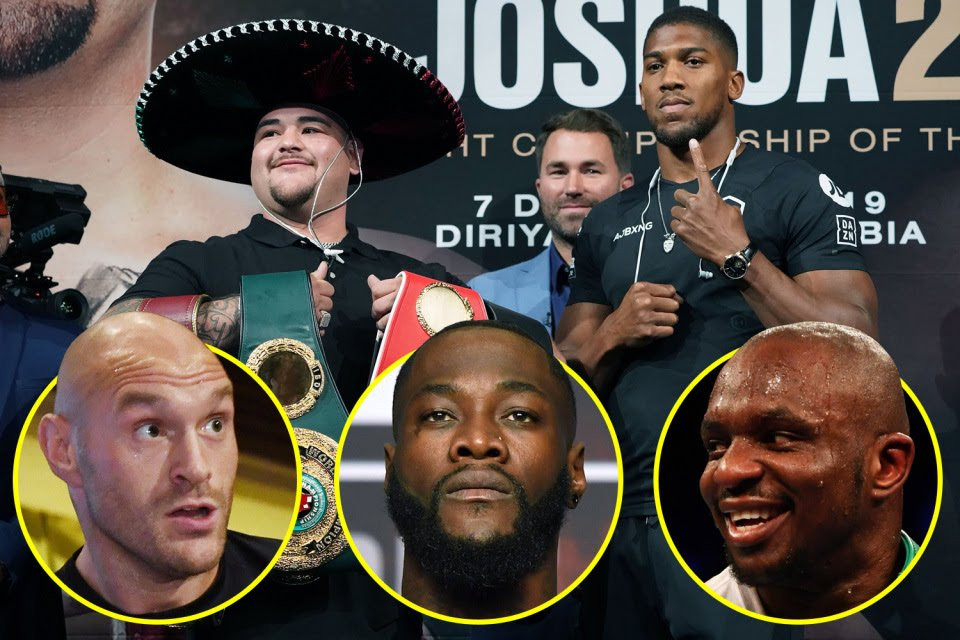 Wilder said: “I really believe Andy’s gonna go in there and do it again.

“When I look at the first fight and I see certain things as a fighter, a lot of red flags that alert me. And if that same mindset and momentum goes into the second fight, Andy Ruiz is going to win that easily.

“I’d prefer him to win because we’re in the same stable. When he wins we have the opportunity to unify the division. If Joshua wins, I don’t think that’s gonna be.

“He got knocked down four times, and then he quit. That is huge for me. On the outside looking in, to see how that fight occurred and everything that was going on, I think he’s going to be fighting his demons inside of that ring, not just Ruiz.

“I know he’s trying to cancel out a lot of things in his mind, especially, including me, his biggest and ultimate rival.
I think Ruiz has the momentum to go in and do it again. It definitely was a big confidence builder and a booster for him to win that first one, especially after getting put on his ass and getting back up and then to put Joshua down four times. It changed his life.
“But coming [out with a win] in the rematch can change his life forever. And for those reasons, I’m leaning towards Ruiz.

Whyte, promoted by Joshua's promoter Eddie Hearn,  said: “I think it’s a great fight just like the first one was.
“Everyone was overlooking Andy Ruiz in the first fight, even I thought Joshua was gonna knock Ruiz out in six rounds…

“The great thing is he has a chance to put everything that was wrong right.
“He’s British, he’s my competitor and he’s my rival, I’m gonna back him. Hopefully he wins and I want him to win.
“It’s good for British boxing, he’s done a lot for British boxing, he’s unified the division and all that.
“He’s a young man just like me, he’s doing well and he’s doing his thing. Hopefully he does win.
“I think he should just do what he normally does, but just work on his jab a bit more. He doesn’t need to go out there and start trying to move and do this, he’s never done that before and I think if he does that he will gas.
“Being on the back foot, Joshua’s not a good back-foot fighter, he’s a come-forward fighter and he’s quite forceful.
“His power and his size and his physical condition is what usually wears a lot of these guys down you know.”
He added: “I want to see him [Joshua] succeed and he definitely wants to see me succeed as well, definitely. We’re both young guys doing well, who have come from nothing.”

Tyson, a  British boxer like Joshua, said on the True Geordie Podcast “Andy Ruiz is a little fat pig, comes in on three weeks’ notice, murdered every donut and taco in California and then goes in with a man who’s had a 12-week training camp with every sports scientist in the United Kingdom.
“But the little fat fella goes in there and bowls him over in seven rounds…
“I see it going pretty much similar to the first fight.
“I know that they've both lost weight, they’ve had more time to prepare, they’ve changed a few things in their training teams and all that.
“They’ll have different approaches and they’ll try different game plans, but Mike Tyson said it: ‘Everyone’s got a great game plan until thy get punched in the face.’
“You can be working on something for ages, you work on it, work on it, work on it, and you get tagged and that’s it.
“You go back to how you once was and you wanna fight.
“They’re both big strong men and they both can knock each other out, but he beat him once and knocked him out, so he’s got a mental edge going into that rematch.
“You’re going into that mentally beaten already because you’ve already been knocked out…
“Everybody has a bogeyman in their career. Whether you find him or not, everybody’s got one. I think personally he may be the bogeyman for him, who knows?”

Ortiz said: “It’s Andy Ruiz’s time to step up and show up, show it wasn’t no fluke.
“He should be able to do it as long as his mind’s in the right place.
“I’m not 100 per cent sure, Joshua is gonna probably come to do a little more boxing, a little more leg work and not just meet him in the middle of the ring.
“So that makes it a little bit of a tougher fight for Andy, but you never know between two punchers.
“Obviously Andy’s not a huge puncher, but he’s big enough to knock out Joshua, so anything can happen.”

Lewis said: “If they don’t fix what is wrong with Joshua, Ruiz Jr wins that fight hands down.
“It must be mental as he didn’t look the same coming to the ring as he usually looked.
“Hopefully it will come out in the future. Joshua made it easy for Ruiz Jr because he wasn’t fully there.”

“Questions have been asked over whether Anthony Joshua has had enough time between the two fights with Andy Ruiz Jr to make the improvements needed to win the rematch.
“Judging by his performance back in June, AJ has had plenty to work on, but I believe he has had time on his side. A fighter can change significantly during a 12-week training camp. In fact, it has been much longer than that as this fight would have dominated the thinking of Joshua since the summer.
“Anthony would have been thinking non-stop about the rematch, about what he could have done better first time out, if given the opportunity. We will see the fruits of that hard work on Saturday. Word around the campfire is that AJ has lost a lot of muscle bulk and is looking at throwing significantly more punches.
“He has also been working on tightening up his defence and that should be much better than it was in New York. Joshua is going to be switched on and as prepared as we have ever seen him for a fight. I’m certainly looking forward to seeing this new and improved version of Anthony.
“If Joshua is able to win build up a lead in the first half of the fight, I expect Ruiz to change his approach and take more risks. In which case, Joshua will have a very good chance of stopping the champion in the later rounds, between 10 and 12.”

“I don’t know [what will happen in the rematch] because anything is possible.
“They’re both great human beings, I like both of them personally, but this is a fight and I just hope the best man wins.
“It doesn’t matter about your style, your technique, or size, it’s the morality in the fight.
“You can have this [good] technique but if you’ve got no zest, no morality, no guts, you’re nothing. Your style means nothing. It’s all about morality, the desire and the will.”
By Linda Ochagla at Saturday, December 07, 2019