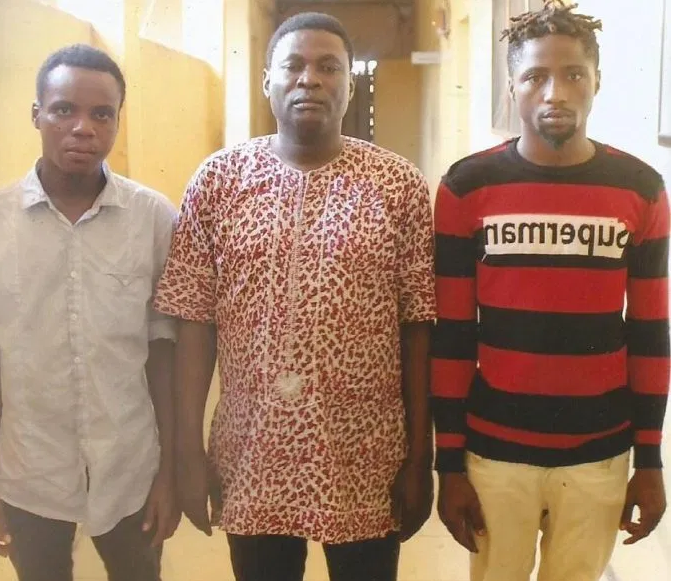 Benjamin Akinsanya, 56, the pastor in charge of the Life House Ministry, Ojo, Lagos, has been arraigned before the Igbosere Chief Magistrate`s Court with two others for allegedly sponsoring a six-man suspected assassins in an attempt to kill a female pastor, Janet Ogunsola over alleged spiritual popularity tussle.

Other suspects charged with the pastor over the alleged crime Include Darlington Orji, 25, and Liberty Elvis, 29. Police said that Akinsanya allegedly paid the suspects N500, 000 to terminate the life of the female pastor in charge of Glorious Chapel Ministry, located at 1, Adeleye Street, Ojo, Lagos to stop her soaring spiritual popularity over him.

Following the ugly development, the distraught complainant sent a save our soul petition to the Inspector General of Police, IGP Mohammed Adamu. Narrating the incident, Ogunsola allegedly stated:

“A woman came to my church to complain of problems and I led my prayer warriors to pray for her and she left. And after about a month, the woman came back to my church to give testimonies that the prayer she received in my church has solved her problems.
“She also stated that she had been battling with the problems for the past eight years at Akinsanya’s Church without solution. When Akinsanya heard of the testimonies, he vowed to kill me because Almighty God used me to solve the problem of his former church member,” Ogunsola stated.

Following the report, IGP Adamu directed the Deputy Commissioner of Police, DCP in charge of FSARS, Lagos, Durosimi Olatoye to hunt down the suspects. Olatoye gave a marching order to his crack team led by Supol Garba Oseni to fish out the suspects anywhere they might be hiding.

The police team arrested the pastor who led the operatives to arrest two of the suspects while others managed to escaped. During investigation, according to the police, the arrested suspects allegedly confessed to the crime and said that pastor Akinsanya allegedly paid them N500, 000 to kill the complainant to stop her soaring spiritual popularity in church ministry in Ojo, Lagos.

One of the suspects, liberty Elvis allegedly stated; “We are members of the Aiye Cult Confraternity in Ojo, Lagos since 2016 and in October, 2019, Pastor Akinsanya contracted six of us with N500,000 to help him kill the complainant for allegedly snatching his church member.
“And when we received information that she was at home, we stormed her residence to attempt to kill her, but we were surprised she was nowhere to be found and that was why we fired guns sporadically into her residence before we left.”

The pastor and others were charged before the Igbosere Chief Magistrates Court on a five-count charge bothering on attempted murder and belonging to an unlawful society called Aiye Cult Confraternity.

Police counsel, CSP Onwumere C.C informed the court that the accused persons committed the offence in October, 2019 at 1, Adeleye Street, Ojo, Lagos. Onwumere told the court that Pastor Akinsanya sponsored the two accused and others still at large to help him kill the complainant for becoming more popular than him in church ministry in Ojo, Lagos.

He said the offences, the accused persons committed were punishable under sections 411, 230(a) (b), 287 (5) (9) and 45 (1) (9) of the criminal law of Lagos State, 2015.  Count two of the charges reads: “That you Benjamin Akinsanya, Darlington Orji, Liberty Elvis did in October, 2019 attempted to unlawfully kill one Janet Ogunsola by shooting sporadically into her residence while she was sleeping.

The accused persons, however, pleaded not guilty to the alleged crime in the open court and Magistrate, A.A Famobiwo granted them N100, 000 bail each with two sureties each in the Like Sum.  Famobiwo adjourned the case till 12 December, 2019 for mention and ordered that the defendants be kept at the Ikoyi Correctional Facility till they perfected theIr bail conditions.
By Linda Ochagla at Wednesday, December 04, 2019