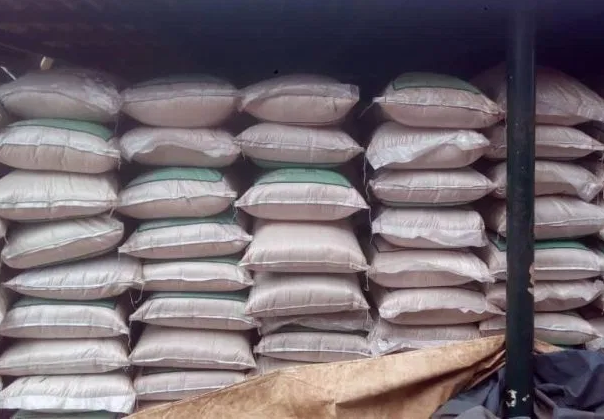 The Nigerian Army has intercepted no fewer than 85 bags of smuggled rice in a compound in Abor-Uwani community in Afikpo North Local Government Area of Ebonyi.

The raid was part of the ongoing “Exercise Atilogwu Udo 1’’. Col. Aliyu Yusuf, Deputy Director, Public Relations of 82 Division of the Nigerian Army disclosed this in a statement on Saturday.

Yusuf said that the smuggled bags of rice, each weighing 50kg, were intercepted on December 19 through intelligence received by troops of Sector 6 (Abakaliki) of the exercise.

“Troops on patrol following a tip-off from the Department of State Security (DSS) raided a compound where a Mercedes Benz truck loaded with 85 bags of suspected smuggled foreign rice was packed.
“This was in Abor-Uwani community in Afikpo North Local Government Area (LGA) of Ebonyi State. The suspects; Bartholomew Obioha Nwankwo, 49, and Mr Nkama Agu, 57, – both from Unwana community in Afikpo North LGA were arrested in connection with the smuggled rice,’’ he said.

The army spokesman added that the suspects, the truck, and the bags of rice had been handed over to the Ebonyi State Commissioner for Internal Affairs for further action. Yusuf said that in a related development, troops in Sector 6 in conjunction with the National Drug Law Enforcement Agency (NDLEA) recently raided the hideout of suspected drug dealers in Abakaliki town.

“Five suspects were arrested while items recovered in the area included suspected wraps of Indian Hemp, tramadol, and cocaine among other things.  He added that a brown Mercedes Benz car with registration number Ebonyi NAC 399 AA was seized.
“Suspects and exhibits have been handed over to the relevant security agency for further action,’’ he said. “Exercise Atilogwu Udo 1’’, otherwise known as Peaceful Dance, is currently ongoing in the South-East zone and Cross River within the Area of Responsibility (AOR) of the 82 division of the army.