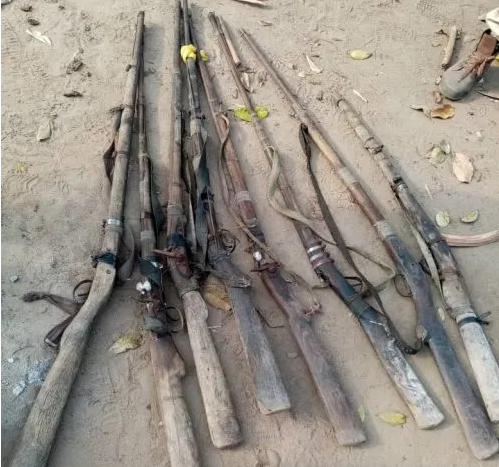 The combined troops of 4 Brigade and 32 Artillery Brigade Nigerian Army Exercise Crocodile Smile IV have recovered eight guns and 725 bags of substance suspected to be cannabis.

The operation was in a joint operation with personnel of National Drug Law Enforcement Agency (NDLEA). This was contained in a statement issued on Sunday, December 15th by Maj. Ojo Adenegan, Assistant Director Army Public Relations, 4 Brigade, Benin.

Adenegan said that the recovery was made during a raid at Ivbiodohen Forest, in Ivibiodohen Village, 5 Kilometers from Uzebba community in Owan West Local Government Area of Edo. He explained that during the operation, the troops raided three different camps with warehouses at various points for storing marijuana.

At the end of the operation, the camps were burnt, while the suspect, the eight locally made guns and samples of the substance suspected to be cannabis were handed over to the NDLEA for further action.

“We are once again using this medium to solicit for the general public cooperation in the area of information sharing on criminal activities within the State and its environs. The Nigerian Army will not relent on its effort at ensuring a peaceful Edo and environs,” he said.