Omoyele Sowore accuses DSS of trying to assassinate him in court; also says they tried to break him in prison (video) 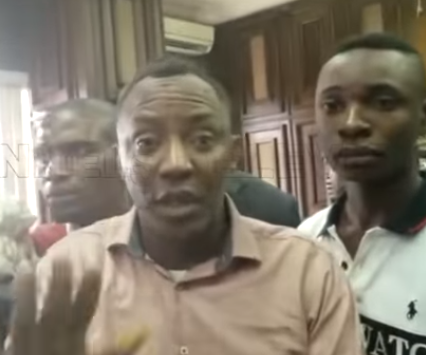 Omomyele Sowore, publisher and convener of the #revolutionnow movement, has accused men of the Department of State Service (DSS) of attempting to assassinate him.

Sowore and his co-defendant, Olawale Bakare, were re-arrested this morning when he appeared before Justice Ijeoma Ojukwu of the Federal High Court in Abuja.

In an interview with Channels TV correspondent, Sowore said that the DSS had allegedly told him that he will not walk out of their detention alive.

“It might be my only word on the record before they kill me; this is an attempt to assassinate me in court. They came with guns and they tried to shoot and they dragged me down in front of a judge after I have been granted bail. I said it that these are a bunch of lawless people and they were reluctant to respect the order of the court. Now they have shown it to the whole world.
They tried to break me in prison, sent delegations to me, offering all kinds of things and I refused and they promised that I will not walk out of their detention alive and that is what they have come to implement today.”

The #RevolutionNow convener urged Nigerians not to be afraid and some people have to make the sacrifice for the Country to work.

“What is important for Nigerians to know is that I am not going to give up until every Nigerian benefit from a country that is theirs and I have made it very clear.
“Nobody in Nigeria should be afraid, it is our country and some people have to make the sacrifice for this country to be a country of rule, law and of dignity; and this also involves even judges, if suspects who have been given bail are not safe in court, the judges themselves are not safe'' Sowore said