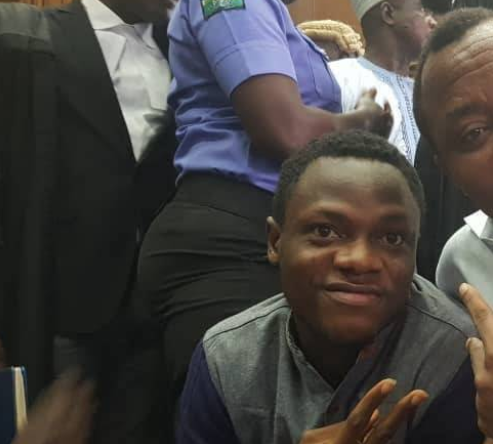 Young activist, Olawale Bakare popularly known as Mandate, who is standing trial with pro-democracy campaigner, Omoyele Sowore, in a case brought against them by the Nigerian Government, has been declared missing.

Operatives of the Department of State Services had stormed the Federal High Court in Abuja on Friday morning during the commencement of their trial and disrupted proceedings in an attempt to forcefully rearrest the two men.

After facing resistance from other activists inside the courtroom, the DSS operatives retreated outside to lay ambush. The situation led to tension within the court premises for several minutes.

According to a report by SaharaReporters, Senior Advocate of Nigeria and lawyer to the two men, Femi Falana, was said to have ferried the defendants in his car to the DSS headquarters where they were said to have been detained. However, it has now emerged that only Sowore, who was in Falana’s vehicle as they left the court, was submitted back to the DSS.

Operatives of the agency are currently searching for Bakare in different parts of Abuja. The armed security personnel in their search for the young activist, stormed Falana’s chamber in Abuja this afternoon hoping to find him there.

A lawyer at the chamber confirmed to SaharaReporters that armed DSS operatives visited the place minutes ago looking for Bakare after claiming that he was not in their facility. The lawyer, who asked not to be named, said;

“DSS operatives just stormed our chamber now looking for Olawale Bakare. They claimed it was discovered he was not with them by the time they arrived their office. They are currently searching everywhere for him. We are hoping that he is safe wherever he is.”

After releasing Sowore and Bakare on Thursday evening, the DSS on Friday filed fresh charges against them, rearresting and detaining Sowore in the process. The uncertainty surrounding Bakare’s whereabouts at the moment has indeed added a new twist to the matter.

He was arrested in Osogbo, Osun State, on August 5, 2019 for participating in a nationwide peaceful demonstration aimed at demanding a better country from the administration of President Muhammadu Buhari. Together with Sowore, Bakare was ordered to be released twice by the Federal High Court in Abuja after meeting stringent bail conditions.
By Linda Ochagla at Friday, December 06, 2019