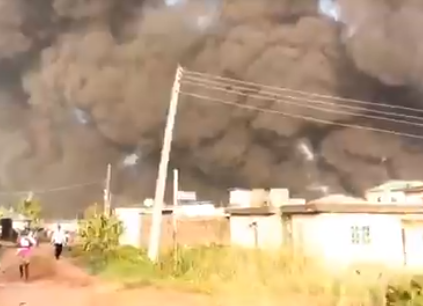 Residents of Gloryland estate in Isheri Olofin are currently running for safety following a pipeline exploson in the area. Some vandals came to the area this morning to vandalize petroleum pipelines running through the area and an explosion ensued during the act. The fire is still burning at the moment.

Writer and Editor, Blessing Ofia-Inyinya Nwodo, who resides in the area, shared a video from the scene and wrote

Nigerians like to play with people's lives!!! They came to burst a pipeline of crude oil and it resulted in this. I woke up this morning and it sounded like the whole world was on fire, I looked outside the window and a wall of flame was racing towards us and people were running. I didn't know how I reached outside in my sleepwear and joined them. I nearly died of panic because because i had to hunt for keys to open the house and the fire was already close. There is a pipe of crude oil there and people come there to burst it at night. If this little mini forest wasn't here, we would all have been consumed. That man was burnt by the fire and as I'm writing this, he is dead. He was bathing in a river there. The person he came with couldn't make it out of the fire. I am told that this is not the first time this has happened. I know Nigeria is a piece of shit but my mother has lost a house before, she cannot lose one again, the pain will be too great. The relevant authorities whoever they are should come to the pipeline at Igando and do something about it.

See videos posted online as shared by residents of the area below
By Linda Ochagla at Thursday, December 05, 2019