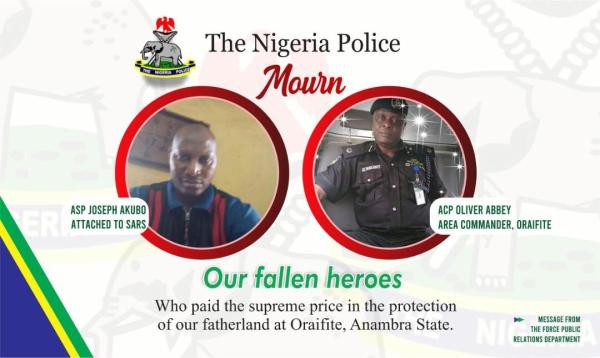 The Anambra State Police Command has released names of its officers who were killed during a raid at the home of Ifeanyi Ejiofor, lawyer of the founder of the Indigenous People of Biafra (IPOB) Nnamdi Kanu.

Idomadiva reported earlier that some members of the proscribed group clashed with men of the Nigerian police at Ejiofor's country home in Anambra State on Monday December 2. The police had gone to the house for a search following a report that it was being used to hide a kidnap victim. Read HERE

The police has now released the names of its officers who were killed during the raid following IPOB's denial of carrying out an attack against the security operatives. Mr Joseph Akubo, an assistant superintendent attached to the special anti robbery squad and Mr Oliver Abbey, an assistant commissioner who was the area commander in charge of Oraifite were named as late victims of the attack.

Mr Ejiofor has already been declared wanted by the police who also accused him of failing to honor invitations over a petition alleging he was involved in “abduction, assault occasioning harm and malicious damage to property” before the raid.
By Linda Ochagla at Wednesday, December 04, 2019