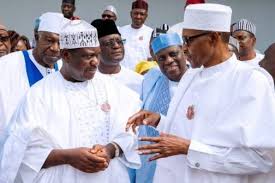 Tiv Youth Organization, (TYO) calls on President Muhamadu Buhari to, as a matter of urgency, call the Minister of Special Duties and Inter-govetnmental Afairs, Goarge Akume to order over his recent insults on the person and office of the Tiv Paramount Ruler, the Tor Tiv, HRM Professor James Ayatse who is also the Chairman, Benue State Council of Chiefs.

During a ceremony in Makurdi at the weekend, the former Senator for Benue North West, George Akume made scathing and derogatory statements against the Tor Tiv, accussing him of partisanship - (tor pati) meaning king of politics.

Akume did not stop at that, he went on to castigate the church in Benue State, calling Pentecostal denominations (where the Tor Tiv fellowships) in particular as insignificant groups who have no electoral value.

We as youths of Tiv land, view Senator Akume's utterances against the Tor Tiv and the entire Tiv Traditional institution as sacrilegious, abominable and unacceptable coming from a supposed prominent son of Benue State.

Akume's claims that Tor Tiv played a key role in his defeat at the last general election is neither here nor there. How did the Tor Tiv cause Akume's defeat? Was the paramount ruler part of INEC or did he prevent Akume's supporters from voting for the Senator?

This is not the first time that Senator Akume has cast aspersions on the integrity of the Tor Tiv and other leaders of the land. Akume has not spared any Benue son or daughter from his vitriol since he lost his bid to return to the red chamber of the National Assembly. The disturbing trend has now moved against the Chief Custodian of the Tiv cultural heritage the Tor Tiv.

WE THEREFORE WISH TO URGE PRESIDENT MUHAMMADU BUHARI TO, AS A MATTER OF URGENCY, CALL HIS MINISTER TO ORDER. This should be the last time that Senator Akume or anyone else hiding behind a political veil would make public statements against the Tor Tiv and other traditional rulers of the state. The Tiv paramount ruler is not a politician. The very time Professor James Ayatse ascended the Tiv parmount throne, he cautioned traditional rulers under him to stay away from politics. He urged the royal fathers to be at peace with all their sons and daughters seeking political positions irrespective of the party they belong to, and to be neutral at all times. He has led by example.
It is therefore instructive that Senator Akume and his ilk should spare the Tor Tiv of the partisan tag.

As a two-term Governor and three-time Senator, Akume more than anyone else ought to have known how illustrious sons of other lands accord high regard to their traditional rulers. His outing against the Tor Tiv was not only shameful and hypocritical but it also exposed him as a bitter man.


...AKUME MUST APOLOGIZE TO TOR TIV

TYO equally demands that Senator George Akume should publicly TENDER AN UNRESERVED APOLOGY TO THE TOR TIV AND THE ENTIRE TIV NATION over his unguarded statements. The apology is important as it will serve as deterrent to others in the habit of launching verbal and written attacks on our royal fathers.

As the Tiv unbrella youth body, we are disappointment that instead of rolling out his achievements as a Minister representing the state, Akume would rather take the path of dishonour and infamy. For a man who had not visited Benue State since his appointment as minister, his people back home expected to hear the 'good news' of development but certainly not bile which he poured on the royal father.

...NEED FOR TIV SONS/DAUGHTERS TO ADDRESS THE AKUME-GATE

What Senator George Akume has begun, if not quickly nipped in the bud will degenerate and become a negative standard for the younger generation who will grow up assuming that it is normal to insult the paramount ruler and other chiefs.

We therefore call on all sons and daughters of the Tiv Nation to rise up in condemnation of Senator Akume's verbal attacks on the holder of the highest traditional office in the land. Akume must be made to publicly apologize to the Tor Tiv, failure of which appropriate sanctions should be applied.

Enough of the despicable act of a man who is expected to be an example of experience and good conduct.