Sowore: 'You can’t release anyone on compassionate grounds' - Femi Falana fires back at AGF Malami 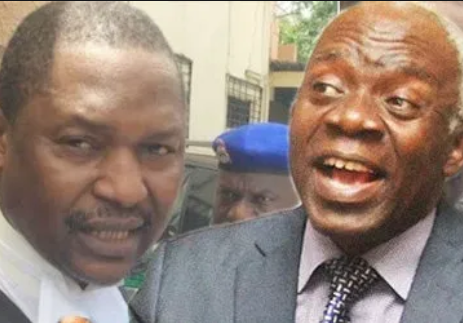 Human rights lawyer, Femi Falana has said Abubakar Malami, minister of justice and attorney-general of the federation, does not possess the constitutional power to release anyone on compassionate grounds.

Falana said this while responding to Malami’s claim that Omoyele Sowore, convener of the RevolutionNow movement, and Sambo Dasuki, former national security adviser, were released on compassionate grounds.

“The only reasons for the release of Omoyele Sowore and Sambo Dasuki revolved around our commitment to the rule of law, obedience to court orders and compassionate grounds,” Malami had said.

In a letter addressed to Malami, Falana said only the president and state governors are entitled to exercise the prerogative of mercy or release any convicted person on compassionate grounds.

“It is trite law that once a trial court has granted bail to any person standing trial for any offence whatsoever and the bail conditions have been met the detaining authority shall release the person from custody without any further ado,” he said.
“In other words, the refusal to release a defendant who has been admitted to bail by a trial judge is tantamount to contempt of court. Hence, before Sowore’s release, we had filed Forms 48 and 49 for the committal of the Director-General of the State Security Service to prison for contempt of court.”
“The government is not permitted to refuse to comply with the order of bail under the pretext of defending the security of the nation. Even under the defunct military dictatorship, detaining authorities were not authorized to incarcerate any person for “security reasons” in defiance of court orders.
“With respect, the federal government has itself to blame for the needless controversy that has trailed the release of the duo. But having belatedly deemed it fit to review your position and advise the federal government in line with the tenets of the rule of law you ought to have apologised to both Sowore and Dasuki.
“That is what is expected of you in accordance with section 32 (6) of the 1999 Constitution. It is not an occasion for grandstanding or an arrogant display of power.”