Taking a step closer to the impeachment of US President Donald Trump by the US House of Representatives, the Democrat controlled House has unveiled two articles of impeachment against Trump, charging him with abuse of power and obstruction of congress.

The articles unveiled Tuesday, say Trump abused his power as president by telling the Ukraine government to investigate his political rival, Joe Biden while withholding a White House meeting and military aid while the second charge states that Trump obstructed congress by ordering White House staff and agencies not to testify in the just concluded impeachment hearing. 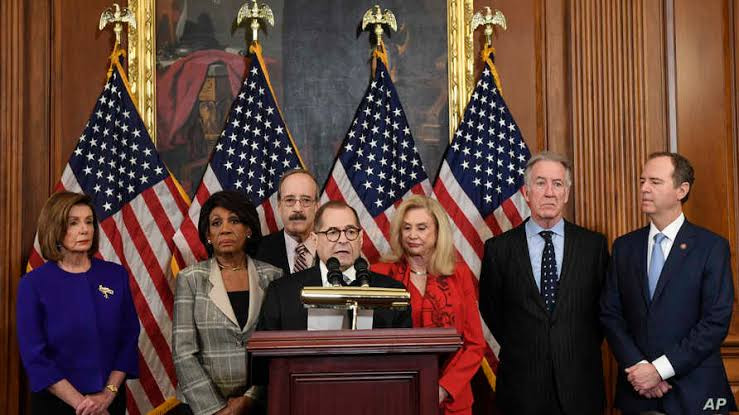 House Speaker Nancy Pelosi was flanked by Judiciary committee chairman Jerry Nadler and Intelligence committee chairman Adam Schiff as they announced the formal articles of impeachment which will be voted on by the house this weak, and if the votes go along party lines, Trump could be impeached by the US House of Reps as early as next week..

Nadler speaking to reporters said Trump had endangered the US constitution, jeopardised national security, undermined the integrity of the 2020 election and 'sees himself above the law'.

Trump reacting to the news on Twitter, called it 'ridiculous'.
Click this link articles of impeachment to read the full texts of the impeachment aticles, and watch video of the announcement below.

The White House slammed the introduction of the impeachment articles and said Trump would "address these false charges in the Senate" after the President did not participate in the House proceedings.
"The announcement of two baseless articles of impeachment does not hurt the President, it hurts the American people, who expect their elected officials to work on their behalf to strengthen our nation," White House press secretary Stephanie Grisham said in a statement. "The President will address these false charges in the Senate and expects to be fully exonerated, because he did nothing wrong."

Democrats meanwhile have come out to explain why the impeachment process is being rushed, as some Americans feel they should have questioned more witnesses, and gotten more first hand information, but Schiff says such delay will be counter productive and give Trump another opportunity to 'steal' another US election.
The argument, 'Why don't you just wait?', amounts to this: Why don't you just let him cheat in one more election?” Schiff said Tuesday, explaining the sped up impeachment effort. “Why not let him have foreign help one more time?”

Schiff said the evidence is clear Trump is trying to influence the 2020 election by seeking information from Ukraine regarding Democrats who may have sought the country’s help investigating Trump’s 2016 campaign.
Schiff said Trump’s efforts in Ukraine show the president is acting as if he can do “whatever he wants … including getting foreigners involved in our election.”
By Linda Ochagla at Wednesday, December 11, 2019