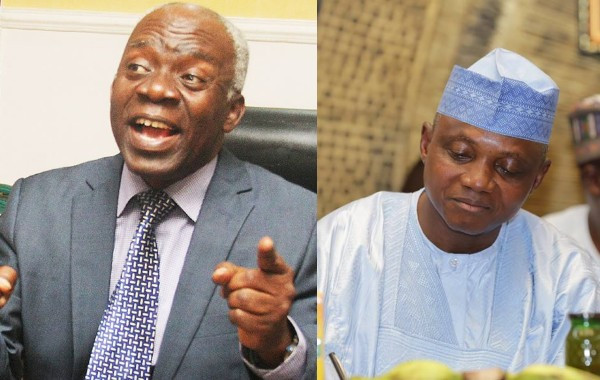 Human rights lawyer, Femi Falana has fired back at Presidential Spokesperson Garba Shehu over allegation of spreading fake news with his claim of an agenda to give President Buhari a third term in office.

The Senior Advocate of Nigeria in a statement released on Wednesday December 25, said the third term agenda for Buhari kicked off in September.

Femi Falana who alleged that the Buhari administration has intensified its campaign for the emasculation of the opposition and constriction of the democratic space, added that he is being attacked by the Presidency for challenging the support groups and APC leaders that are behind the third term campaign.

“The third term agenda for President Muhammadu Buhari kicked off on September 21, 2019 under the auspices of “Movement For the Approval Of Buhari Third Term.
“The members of the group who launched the campaign in Abuja were not harassed by the Police or the State Security Service. The Presidency did not deem it fit to disown or dissociate itself from the campaign.
“However, following the popular rejection of the campaign, the Presidency issued a statement on October 2, 2019 to “correct internet-based gossip and un-informed media commentary regarding presidential term limits, given credence by so-called support groups, staging street demonstrations asking President Muhammadu Buhari to do a third term.
“Notwithstanding the official denial of the third term agenda, the Buhari regime has since intensified its campaign for the emasculation of the opposition and constriction of the democratic space.
“This has been manifested in the subversion of the rule of law through disobedience of court orders, sponsoring of anti media bills and reckless arrest, detention and prosecution of the perceived enemies of the federal government. Peaceful meetings and rallies against unpopular policies of the government are violently suppressed while crowds are rented to attack groups and citizens who challenge authoritarian rule in the land.
“The Presidency has decided to attack me for challenging the support groups and APC leaders that are behind the third term campaign. Even though the campaigners are well known to the security agencies they have not being attacked by the Presidency.”