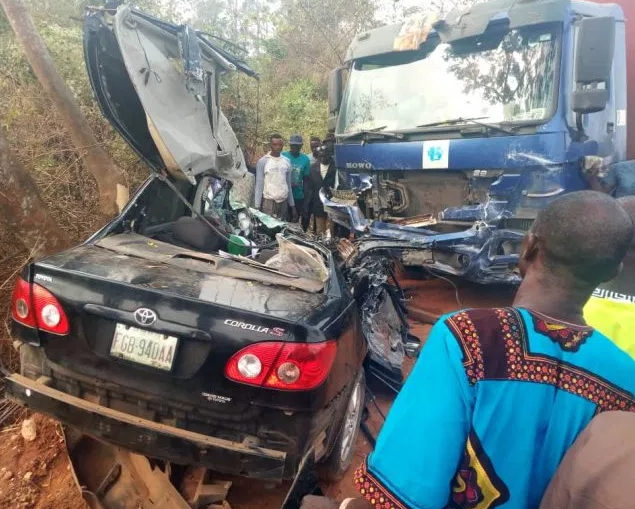 The Ogun Command of Federal Road Safety Corps (FRSC) on Friday, December 20th said three persons died while one person sustained injuries in an accident involving a truck and a Bajaj motorcycle around Toll-Gate on Lagos-Abeokuta Expressway.

Clement Oladele, Sector Commander of FRSC said the accident happened at about 12.59 p.m. on Thursday. Oladele explained that the truck with registration number, KRD 72 XY, had brake failure and rammed into the Bajaj motorcycle, marked AKM039 UP, conveying two female passengers who were just disembarking from the bike.

The sector commander said that five persons, comprising 3 male adults and two female adults, were involved in the accident. According to him, a passerby died instantly while a female passenger later died after getting to the General Hospital, Ota.

The FRSC boss also said that the sum of N72,930 recovered from the scene of the accident had been handed over to the victims’ relations. Oladele commiserated with the family of victims and prayed that the Lord will grant them the fortitude to bear the losses.

He, however, enjoined motorists to drive cautiously with absolute concentration and give consideration to other road users, noting that some of the crashes were avoidable and caused by non adherence to traffic rules.
By Linda Ochagla at Friday, December 20, 2019