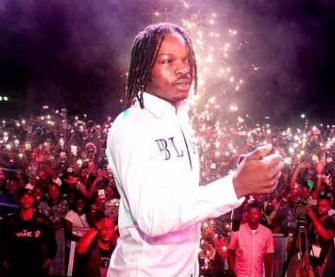 Bala Elkana, the spokesperson of the Lagos state police command, has confirmed the arrest of 11 miscreants at Eko Hotel and Suites, venue of Naira Marley's concert, Marlian Fest, which held last night.

Earlier today, a video of some of the acclaimed Naira Marley fans aka Marlians, locked up in a taskforce van, surfaced online. The men who claimed to be Marlians were seen in the video begging the police and other officers to release them after they were picked up. Recall that videos of some of the suspected fans of the singer scaling the fence of the Eko Hotel and Suites to gain entrance into the concert surfaced online.

LIB reached out to Mr Elkana for his comment on the arrest. According to him, some of those arrested were miscreants outside the Hotel, who attempted to steal the phones of those attending the concert. He said others that were arrested tried forcing their way into the venue when they had no ticket. According to Bala, the concert was generally peacful

''We have 11 suspects arrested and mostly outside the event venue. These are miscreants who come mainly to steal. Some of  them were arrested after stealing handsets from some fans that wanted to enter. So when they attempted stealing handsets, police quickly rushed and arrested them and picked them. Some of those arrested also had no tickets, they just came trying to force their way into the event venue. The tight security could not allow them  and so they were picked and handed over to the police for trying to cause commotion there. They were picked by the police and other security outfits that were there. But the concert was generally peaceful, the whole event was peaceful'' he said

Bala said the suspects are currently being detained at the Bar Beach police station and they would charged to court.
By Linda Ochagla at Tuesday, December 31, 2019