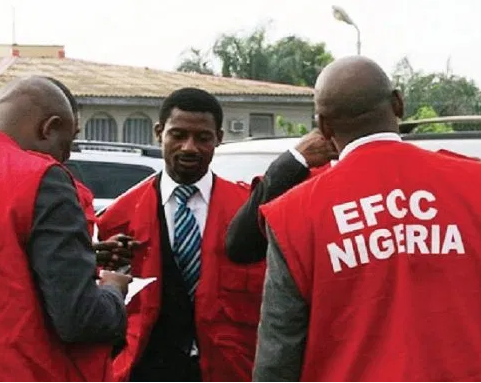 Victims of a Ponzi scheme executed by two brothers, Kingsley Nwegwu and Joakin Nwegwu, both directors of ACJEC Global Services Ltd have expressed dissatisfaction after they were given a light punishment on December 2nd by Justice M.L. Abubakar of the Federal High Court, Awka, Anambra State.

The brothers were docked for 50 counts of conspiracy and obtaining money by false pretence to the tune of N98.7million. After reviewing the evidences brought against them, Justice Abubakar, held that the prosecution proved its case beyond every reasonable doubt, and so, convicted them accordingly.

While sentencing them to one year in prison, the trial judge further ordered that all the properties traced to them in the course of investigations, should be forfeited to the Federal Government. He also gave them an option of fine of N1million each.

However, many of their victims, who had thronged the court premises, expressed dissatisfaction over the one year imprisonment given them by the court, particularly the option of N1million. The two brothers were docked by the Economic and Financial Crimes Commission, EFCC, Enugu Zonal office.

Their journey to prison began in 2011 when they lured people to invest their money in ACJEC Global Services Ltd with the promise of paying mouth-watering 30- 34 percent annual interest.

The petitioners alleged that after investing the said money they never got the interest nor the capital invested in the company.  Investigations carried out by the EFCC further revealed that more than N4 billion was paid into the accounts of the convicts by their over 200 victims, in what turned out to be a Ponzi Scheme.

One of the victims was said to have invested more than N50million. Count 15 of the charge against them reads: “That you, Kingsley Chinedu Nwegwu, Chetachukwu Joakim Nwegwu and ACJEC Global Services Ltd, on or about the 23rd of March, 2011 at Awka, Anambra State within the jurisdiction of the Federal High Court of Nigeria, with intent to defraud, obtained by false pretence the sum of N15,000,000.00 (Fifteen million naira) from Okeke Osita Samuel when you represented that the said amount of money was an investment in a business of partnership venture which would generate more financial income for the said Okeke Osita Samuel, a pretence you knew to be false and thereby committed an offence contrary to section 1(1) b of the Advance Fee Fraud and Other Fraud Related Offences Act No.14 of 2006 and punishable under Section 1(3) of the same Act.”