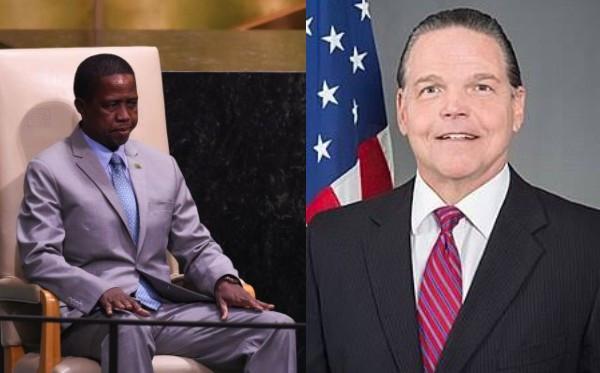 President Edgar Lungu of Zambia has asked the U.S. Ambassador to his country, Daniel Foote to leave Zambia after criticizing the 15 years jail sentence a gay couple were handed after being caught red-handed in the act.

Foote who called on the government to reconsider laws that punish minority groups in a comment credited to him last month, disclosed that he was horrified with the sentencing.

"The move was particularly disturbing as government officials can steal millions of public dollars without prosecution."

Speaking on state-owned ZNBC TV on Sunday December 15, Lungu revealed that they have filed a formal complaint to the US government as they don't need such people around them.

“We have complained officially to the American government, and we are waiting for their response because we don’t want such people in our midst. We want him gone.
“We are saying no to homosexuality. When you are tying it to aid, if that is how you are going to bring your aid, then I’m afraid the west can leave us alone in our poverty. And we’ll continue scrounging and struggling."