"Any woman I stand next to, they say I’m dating" - Brad Pitt laments 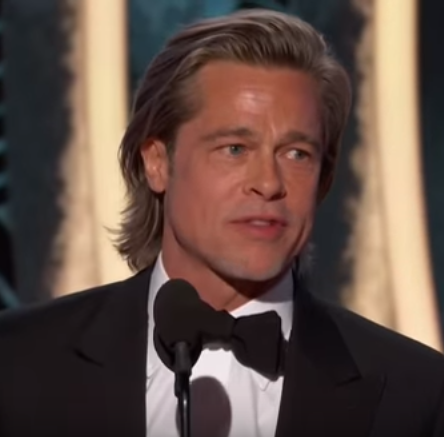 Brad Pitt gave an interesting acceptance speech when he won the award for Best Supporting Actor in a Motion Picture, Drama, for his role in Quentin Tarantino’s Once Upon a Time in Hollywood.

In his speech, he thanked Quentin Tarantino. Pitt also thanked his co-star, Leonardo DiCaprio, saying: "He’s an all star, he’s a gent, and I wouldn’t be here without you, man. I thank you. Still, I would’ve shared the raft."

By "raft", Pitt was making reference to the movie Titanic where Jack - acted by Leonardo DiCaprio - froze to death while his love interest Rose stayed warm on a raft.

Pitt, who attended the 77th Golden Globes without a partner, added: "I wanted to bring my mom but I couldn’t because any woman I stand next to, they say I’m dating and it’s just be awkward."

Listen to the speech below.
By Linda Ochagla at Monday, January 06, 2020