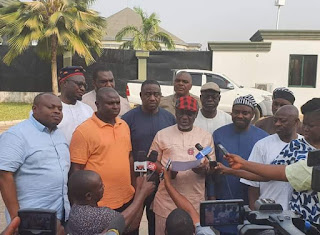 We members of the Benue State Caucus of the National Assembly as herein undersigned, having observed with great concern the crisis generated by the verbal attacks on the person and office of the Chairman, Benue State Council of Chiefs, the Tor Tiv, His Royal Majesty, Professor James Ayatse, see the need to lend our voice on the matter.

2. We state categorically that the Tor Tiv as Chairman, Benue State Council of Chiefs must be respected without any preconditions by all Benue sons and daughters regardless of their status and locations. This is the practice with every African society, and ours should not under any circumstance be an exception.

3. It is therefore totally unacceptable for a Benue son and particularly a man who has occupied the highest positions of leadership in the state and beyond, to deliberately seek to denigrate the sanctity of the Tor Tiv institution.

4. We find the recent uncomplimentary and derogatory remarks by the Minister of Special Duties and Inter-Governmental Affairs, Senator George Akume most unfortunate, and if allowed to go unchecked, portend grave consequences not only on the image of Benue State but also would set a negative precedence for the present and future generations.

5. We therefore condemn in very clear and strong terms the Minister's regrettable utterances against the Tor Tiv, His Royal Majesty, Professor James Ayatse, and we urge Senator Akume to de-escalate the ugly situation in the best interest of our dear state and tender an unreserved apology to Tor Tiv.

6. Furthermore, we must sound a note of caution to other elders who ordinarily should be looked up to as peace makers in times such as this, but who have opted to rather fuel the crisis for whatever reasons.

7. We particularly view as highly condemnable, the comments by elder Simon Shango who lacks the integrity to comment on an issue that has the tendency to divide the state, but chose to take sides with Senator Akume in further castigating the Tor Tiv against whom he levied unfounded allegations of partisanship.

8. We urge all Benue sons and daughters to uphold the cherished values of our state, prominent amongst which are respect for constituted authorities, elders as well as the custodians of our cultural heritage - our traditional rulers.