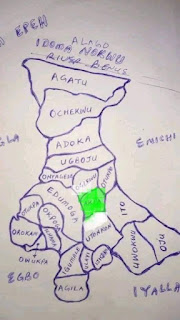 It's founding father is Akwu, the last son of Idu-Oma who traded salt at Akwana region of Apa before the "efu onya" forced him southwards with other Idoma but he initially settled at Ogoja and married where his offsprings picked the distinct dialect/language. Akpmochi is the supreme creator of the universe and man. lesser gods like anjenu, ikpogo, omukparu mediate between man and Akpmochi while the Imaku opu is exactly the same as Alekwu afia. The belief in afterlife (Obankwu) and reincarnated is same with other Idoma. They are bilingual and speak the general Idoma father's tongue and the Akweya mother's tongue.

Masquerades and dances include Odumu, Ichahoho, Anolo etc. Their culture is so advanced that it is not unusual for other Idoma communities to employ them in their ceremonies.
Akpa fought series of war with Ufia which later led to their conquest by the British.
The district head of Akpa is Chief Hyacinth Ogbu (gone hunting)
Akpa has produced many notable Idoma figures including my own principal and former minister of Education Mrs Grace Ogwuche
By Linda Ochagla at Tuesday, January 14, 2020